The new pre release Counter Strike : Global Offensive update for May 14th, 2020 has rolled out and the beta build is ready to be tested. The beta build is available in CS:GO beta depot and available for the players to try out. This build is compatible with public matchmaking and here are all the details related to it.

To try this pre release update, first you need to enroll for the CS:GO beta depot. It allows the game’s developers and users to test changes not yet available in the public version of the game. To opt into the beta depot,

Note that you will be required to download update files. The download size will vary based on the number of changes in the beta.

Now that you have successfully registered for the beta depot here’s what the new beta build, “texture_streaming_beta” holds for you.

A new experimental video setting has been added to the menu, called Texture Streaming. Texture streaming allows the game to defer loading of high-resolution textures until they are needed for rendering, potentially saving a significant amount of video memory. On systems with slower disk access, streaming textures may be momentarily visible. 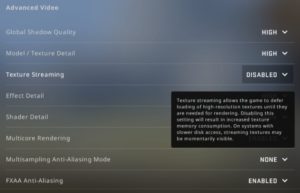 While you’re on the beta build, disabling this setting will result in increased texture memory consumption.

Texture streaming is a method which dynamically adjusts the quality of the textures according to the Video RAM (VRAM) allowance. This may prove beneficial for older systems with less amount of VRAM or where the VRAM is fused with regular RAM such as AMD’s Accelerated Processing Units (APU’s). On systems with higher VRAM (4 gigs or more), benefits would still be noticeable.

Thus, this new pre release beta depot might prove beneficial if you have, what they call a “potato” PC.