by Jahan Patel
in Manga, News

So when a shonen protagonist shouts that he will surpass his limits, you know he will surpass his limits! Black Clover Chapter 271 showed us the fight between Vice-captain Nacht is his assimilated form with Asta + Liebe fighting with their new contract. Nacht tells them that the most efficient way is for the host to take the power of the Devil but Asta is adamant to share the powers. Nacht realizes that the only way the Anti-magic duo figures out their powers is through fighting! The summary of chapter 271 can be found in this article. Chapter 272 was reported to be on a delay. So we have to wait another week before we can see the limits surpassed for Asta. Let us talk more about Black Clover 272 Spoilers, Release Date, Predictions & Raw scans. 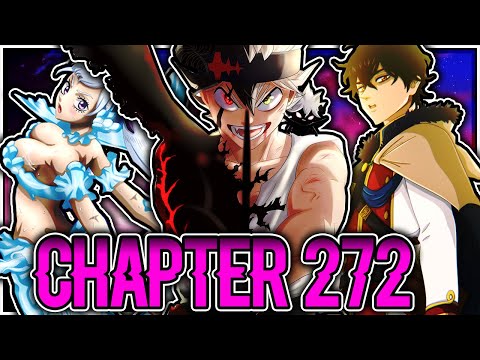 Where to read Black Clover 272 Manga? You can read the manga for free on Viz Media or Manga Plus.

The first panel asks the question of the true power of the Vice-Captain as he dons that cool devil form. This devil form with the human is called Assimilation. Nacht has used his main devil- Gimodelo for this transformation.

Nacht says that if Asta wants to become much stronger he has to assimilate with AMD. Vice-Captain Nacht then uses his shadow abilities and uses a tail attack from the ground. They break through the attack of Nacht as Liebe transfers his power and shrinks down to a baby. The devil-binding ritual allows the human to get complete power of the devil but it is tough to initiate in the first go.

Nacht says that in their case, Asta is just draining the power of the Devil rather than uniting. Then Asta asks Liebe on how to use the power. But Liebe himself has no idea, he was just preparing to takeover Asta’s body.

There is a conversation going back and forth between Liebe and Asta blaming each other. Nacht gets annoyed saying they both cannot achieve anything. He calls the assimilation with Gimodelo, “Pack”. He says that unless his main body is defeated all the shadows around them will not disappear. All the shadows have a similar Ki and they cannot distinguish the main body from the rest.

Nacht says that the contract Asta has made to be equal will not give him all the power, making him useless. But Asta draws Yami’s Katana calling it- Demon Decapitator and says that he will surpass his limits!

Realme Q2 5G A.21 update has fixed some previous bugs