There is little information available though for the Navi Dimgrey Cavefish

It is often said that silences are followed by turbulent storms. Well, if you are an AMD fan chances are you desperately want this to be true. We haven’t heard much from AMD this season. As unconventional it was, they teased us of the upcoming Radeon RX 6000 in a Fortnite game but nothing significantly more. Now big updates have surfaced concerning the AMD Navi family, involving the Navi 21, 22 and 23. The Navi DNA carrying GPUs are expected to uplift AMD’s stature in comparison to their fierce rivals NVIDIA. In these initial times we only have entry level data for Navi 23 and more on the Navi 22 and Navi 21.

The most basic specifications were collected courtesy Mac OS 11 beta that ran the firmware “AMD RadeonX6000”. Last time around we talked of AMD’s upcoming architecture, the Cezanne and Lucienne. The Zen3 entrants are estimated to feature upto 8 Computing Units (CU). Navi 21 codenamed the Big Navi has been doing rounds on the Internet and we now know that it would run 80 CUs. A rough prediction means that would equal 5120 Stream Processors. If the Mac OS 11 beta versions are anything to go by, Navi 21A has a boost clock of 2050MHz. The 21B Navi variant manages a 2200MHz. The latter gives a shader performance of 22.5 TFLOPs. 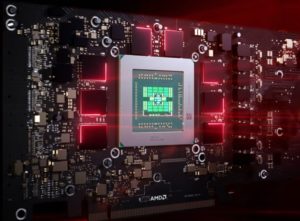 For those minding their budget, Navi 22 a.k.a Navy Flounder would make a balanced package.. It has the same number of CUs as Navi 10, at 40. The maximum GPU clock on this one is 2500MHz which is more than decent given its RDNA2 structure. As of now the only comment that could be made about the Navi 23 codenamed Dimgrey Cavefish is that it features 32 Computing Units. Navi 31, initially reserved for advanced Radeon RX 7000 series will be built on a revamped microarchitecture from Navi 21.