A popular gamer tweeted her discovery of the Easter Egg, which also teases users of the upcoming Big Navi.

What’s that one thing that stays common across all the leading tech brands in their respective segment? Marketing! All the efforts towards building up the hype, teasing us for long periods until finally making their offering officially available. Whether or not these products are worth the hype is an arguable matter. The PR teams give it their best nonetheless. Talking about pulling a marketing stunt, the latest gimmick to have caught the eye is from AMD. Amidst all the noise that NVIDIA GeForce RTX 3000s created a response from AMD was almost predictable. An Easter Egg in the middle of Fortnite though was the least of things one could predict. Well, get used to the AMD way of doing things.

Popular gamer @MissGinaDarling posted on Twitter a screenshot of an Easter Egg discovery while she was playing Fortnite. Now to all you Fortnite loving geeks if you are planning to pounce on the game right now, we will tell you its whereabouts. The Easter Egg could be found in AMD’s Battle Arena MAP, a stadium that is inspired and structured over AMD’s theme. Interestingly, it asks you for a code to proceed, and that code is 6000. To those of you interested in Fortnite, that is just an ordinary code with something exciting to conquer. But, for my amigos that love AMD, this hints at the arrival of AMD Radeon RX 6000. That’s not all. Upon entering this magic figure of 6000, you are greeted with a message that reads. “Something BIG is coming to the AMD Battle Arena!” 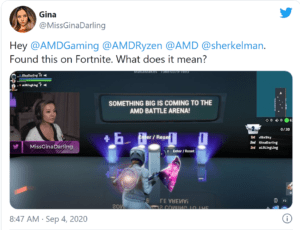 Most sources believe that the BIG here is definitely a reference to Big Navi. Well, that’s a difficult proposition to doubt given that Big Navi will be a field-leveller to GeForce RTX 3000s. A few days ago AMD’s Roadmap 2020-2022 was also leaked. It packs some enticing GPUs, the likes of Van Gogh, Reimbart and Raphael to mention a few. Big Navi will be made on RDNA2 architecture, a need of the hour for AMD, especially with NVIDIA’s Ampere around. Radeon RX 5700 XT is among the best gaming GPUs available in the market right now. It is therefore imperative to hope that Radeon RX 6000 will pack a greater punch. The Fortnite reveal should only be considered as an indirect alarm for now.