Well, there are a lot of fans who have been waiting for the mobile version of their favorite Rainbow Six series. The creators of Rainbow Six announced a game called Elite Squad for the Android and iOS platforms and released a trailer. And if you are supposed to be a mobile-game enthusiast, you already know the outcome. Fans were expecting something like Tencent’s PUBG Mobile, a perfect mobile-version of the original PUBG. But things turned out to be different and left fans disappointed.

But it looks, Rainbow Six fans are finally getting, what they asked for. A Chinese game developer named Qookka Games released a new game called Area F2, which is nothing but the mobile version of the popular online tactical shooter – Rainbow Six Siege. The game is still in beta version and already has more than 100K downloads on the PlayStore.

ALSO READ: How to download Area F2 apk in any region – Android & iOS

We still have no idea of how Qookka studios are going to handle things in the future, as Area F2 is almost identical to the Ubisoft’s Rainbow Six Siege. And there are no official reports of Ubisoft and Qookka’s partnership to bring the mobile version of R6. Well, it’s a different topic of discussion. But for now, let’s talk about Area F2, or we should say Rainbow Six Siege Mobile’s rip off? 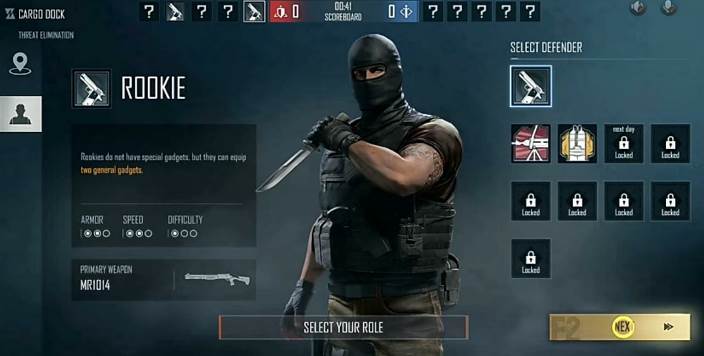 According to the official description, Area F2 is the first Close-Quarters Battle shooting game on mobile, where players fight over ultra-realistic environments as attacker and defender, playing as one of a wide selection of agents, each with owns their unique ability. All roofs and walls can be reinforced or destroyed, challenging players’ skills and tactics as every wall may become a potential entry point, just like R6.

Area F2 features more than 20 Agents with exclusive gadgets, which can be used tactically. Players can choose from 20+ elite agents, each having different nationalities, based on real-life special forces. Players can set up a machine gun to lay down suppressing fire, destroy walls with explosive crossbow bolts, or set trip mine at potential entry points. Each agent has its unique gadget, resulting in a wide range of tactical combinations and interactions.

The game also features realistic and varied environments with destructible walls. Attackers can destroy walls to create their entry points, while defenders can reinforce doors and windows to prevent attacks.

The base Counter-Terrorism Units (CTUs) available for play are the American Hostage Rescue Team (referred to in-game as the FBI SWAT), the British SAS, the German GSG-9, the Russian Spetsnaz and the French GIGN, each of which has four operators per unit split between attackers and defenders.

ALSO READ: How to download Area F2 apk in any region – Android & iOS

Well, everything is similar to R6, and it’s great. Hats off to the developers, they have successfully created the mobile version of Rainbow Six Siege, but the game lacks good graphics and realistic game physics. Still, a lot of work has to be done in the game, and it makes sense, as the game is still in beta version.

We recommend you to try out Area F2 once if you have been craving for the mobile version of R6. The game is available on Google Playstore and Apple Store, and the file size is around 700 MB.