The Apple iPhone 12 is due for release in 2020. Expected announcements of arrival this month.

by Akshay Tahiliani
in Apple, Technology

The year 2020 was rather calm for the smartphone industry. Announcements, updates and releases all proceeded at laid back pace. Some companies voluntarily choose to hold back their planned releases given the inactivity of markets. However, most brands approaching the third quarter of the year decided to go ahead and say no to delays. Most flagship smartphones have made way into the market. Just a couple of days ago, we released the list of those Smartphones releasing this October. A certain tweet has however caught eyes. Apple’s iPhone 12 remains to be launched and is probably going to be the last big arrival of this year. The tweet talks nothing about iPhone 12 though. It mentions, wait-for-it, Apple iPhone 13!

Information regarding Apple iPhone 13’s display and camera out

Had this year been the so-called “normal”, we would have had the Apple iPhone in market by 15th September. The fact that iPhone 12 is yet to be out, any leaks regarding iPhone 13 are sure to raise eyebrows. Ross Young is founder analyst of Display Research and DSCC and boasts 25 years of experience in the display industry. Now, we personally find it fitting to trust a man of Ross’ experience. In his tweet he ends our hope of having any new model to iPhone SE in 2021. This information is particularly backed by Mizuho Securities. 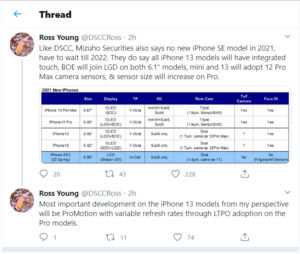 He further addresses that the same source suggests Apple iPhone 13 will have integrated touch. Most other things are set to remain similar to iPhone 12 Pro Max. That means an impressive quad-camera with three 12MP shooters will also feature on iPhone 13. The ProMotion feature is expected to give Apple iPhone 13, the cutting edge no other smartphone would promise.