U.S. banned Huawei from using Android services and frameworks. This led to the removal of any kind of Google services Huawei received. When we say Huawei, it includes Honor too. But despite that, Huawei managed to become the brand to have sold most smartphones last month.

Huawei is developing an Android alternative called HarmonyOS, which will be available not only for Huawei and Honor devices but any brand willing to replace Android. Till then, Huawei devices use AppGallery as the default and in-build App Store. Having stated that, Huawei Browser is the default search engine.

The widely used Huawei Browser has officially received a new update. The app update is currently out and available on AppGallery. The update size is 43.7 MB. Released today, the update brings 4 new features which will make the app more versatile functions-wise. Check them out below. 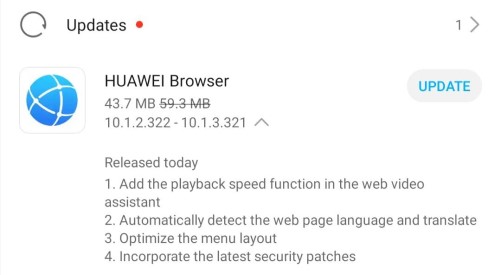 Fans can already tell that the brand is trying all that it can to fill Google’s place when it comes to apps and software. The language detection feature is widely used in Google Chrome, especially when visiting foreign websites and media producing content. The translation feature will be a comeback feature for Huawei’s present search engine. Bringing attention towards security patch updates itself is a very solid reason to appreciate Huawei’s works towards stabilizing Huawei Browser.

The app update is not available online or on any other app sources/ stores. The only way to update this version is by heading to AppGallery on your device which is now the official store of the brand. Search for Huawei Browser and you will find the option to update.