AMD would like to challenge Intel who is also in bed with MediaTek.

It is always interesting to see two tech-brands with proven pedigree collaborate to innovate. However, some collaborations shock you to a great extent, in the sense that you don’t see it coming. AMD has joined hands with MediaTek to make a surprise entry into the WIFI chipset market. Well, surely this is an audacious move by brands second-best in their segment to topple the ones leading the market. So, this does seem like a coup against well-settled Intel and Realtek. MediaTek, as we all know, has made its own little space in the mobile SOC space with its well known Helio range of processors. They have also enjoyed a fair bit of success by producing cellular MODEM chips. All of that seems enough to convince AMD that MediaTek would make good partners to support their debut.

WiFi 6 chips, 5G MODEM; What do AMD and MediaTek have in mind?

Reports suggesting on a possible collab first appeared in Digitimes. The aim of the partnership is to start working on WIFI 6 ASIC chips, at least initially. The course of this collab would then drift towards making 5G modems. AMD seems to have drawn their inspiration from arch-rivals Intel in this scenario. The latter has a business users dedicated line that runs on vPro processors powered by 10th Gen Intel Core. The WiFi controllers in notebooks featuring vPro platform are all Intel built. AMD systems also feature WiFi controller from Rivet Network, which unfortunately is now owned by their rivals, Intel. 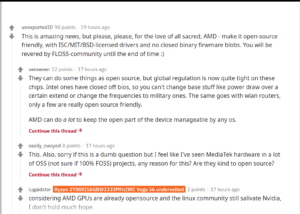 From the angle that I see, this move suggests that AMD is facing the Fear of Missing Out. We mentioned earlier about how Intel assumes complete control over things in its vPro processors powered systems. A month ago Intel revealed that they will share the bed with MediaTek will bring 5G connectivity to its devices. With this discussion up on Reddit, people urged AMD to make these friendly with ISC/MIT/BSD-licensed drivers. When will we see the first wave of AMD devices born of this partnership? No clue as of now. Till then go take a look at latest MSI Alpha 17 & 15, all AMD gaming dedicated laptops.