Not so long ago it became known that AMD is preparing to release several updated processors based on Zen 2, which will be included in the Ryzen 3000XT series. Next week, AMD may introduce a trinity of 7-nm processors Ryzen 5 3600XT, Ryzen 7 3800XT and Ryzen 9 3900XT, belonging to the so-called Matisse Refresh family. Now the upcoming Matisse Refresh family products have appeared in the assortment of a large French online store, due to which some of their characteristics have been confirmed, but most importantly, the estimated prices have become known.

From their direct ancestors (Ryzen 5 3600X, Ryzen 7 3800X and Ryzen 9 3900X), new products differ in more aggressive dynamic overclocking, expressed in the value of 200-300 MHz. As the first tests show, the performance gain relative to predecessors is 5–10%.

For example, in the popular Cinebench R15 and Cinebench R20 packages, the new products show a decent result compared to the 10th generation Intel Core with an unlocked multiplier.

Meanwhile, the Ryzen 7 3800XT and Ryzen 9 3900X were spotted in 3DMark bases. For a 12-core, the maximum frequency was 4673 MHz, and the 8-core was content with a mark of 4623 MHz. These values ​​are slightly less than expected but do not forget that we have pre-release samples. In the future, the success of conquering particular frequencies will directly depend on many factors, including the quality of a particular crystal, the type and firmware of the motherboard, cooling efficiency, and so on.

The French store mentions three processors: the six-core Ryzen 5 3600XT, the eight-core Ryzen 7 3800XT and the twelve-core Ryzen 9 3900XT. The frequency characteristics are indicated exactly the same as the Chinese source cited earlier – both the base and maximum Boost frequencies for new products are increased by 200-300 MHz compared to the original Ryzen 3000 series (Matisse) models.

As for the indicated prices, it is worth mentioning right away that the Materiel.net store has higher prices compared to other sellers in France and Europe as a whole. Even now, the Ryzen 5 3600 folk favourite here costs 220 euros, while in other European stores it can be found for about 170 euros. 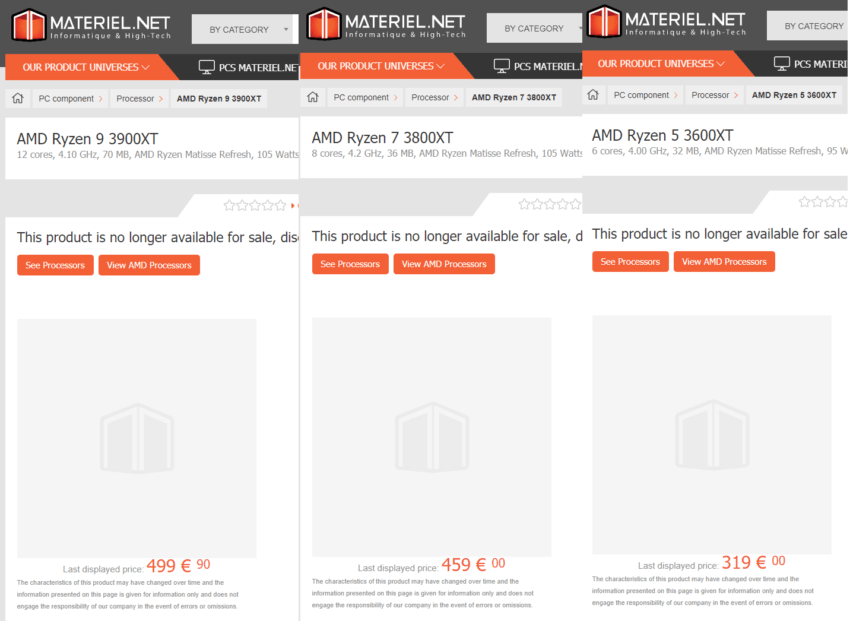