AMD Ryzen is now the direct rival to Intel. The level performance these processors have been providing for computers and systems is spectacular. Ryzen is the latest company in this field; there is nothing stopping developers coming up with new processor series. The recent high-end processor series was the Ryzen 3000 series.

Well, numerically it is only fair to expect Ryzen 4000 series next. However, the officials seem to have bigger plans for the next graphic processor series.

Patrick Schur, a software engineer who has been disclosing important details related to this subject tweeted something really interesting about the upcoming AMD Ryzen series.

A rumor that has been surfing around the web for a long time finally seems to gain closure. Last month, many reports stated that the upcoming series from AMD Ryzen would most likely be named under the 5000 series. So the expected processors from Ryzen were reported by the names 4950X or 5950X.

Hence, the tweet from the source is not much of a surprise. Do note that information related to the 5000 series has not been officially confirmed anywhere. But as mentioned above, we are expecting two graphic processors to be unveiled soon. Sources state that the AMD Ryzen 9 5900X will be a 12 core processor whereas the AMD Ryzen 7 5800X would be an 8 core processor.

Talking about the availability, most of you might be familiar with the upcoming desktop processor from AMD- AMD Zen3. Officials confirmed that Zen3 will be launched on October 8, 2020. But the processor series has not been revealed yet. It is most likely that we will get to see the AMD Ryzen 5000 series announced along-side. 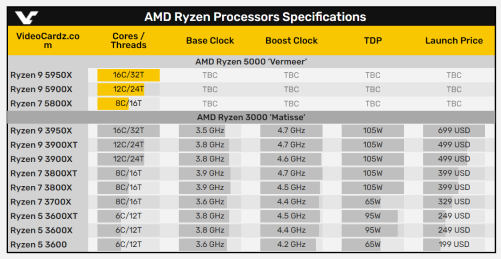 We hope to pass on the official details as soon as possible. But as of now, these are the only details available. We keep you posted about this news!

NVIDIA Broadcast: Download, install and set-up [Link and Guide inside]

The Biggest Coaching Bug in CS:GO HIstory: "THE PURGE"