by Akshay Tahiliani
in Technology

It has been a good start to life for AMD’s Ryzen 5000 CPUs. They were launched by the company with the aim to challenge for top spot in the single processor CPUs category. Well, we don’t think there could have been a better timing for the Red brigade to introduce gaming dedicated CPUs. As is with most range of products, customers are often wowed by what sits at the top of the hierarchy. Similarly, Ryzen 5950X and Ryzen 5900X have been getting all the deserved attention. However, a budget friendly Ryzen 5 5600X also managed to impress a fair bit. It’s most recent appearance in the PassMark CPU benchmark test proves why AMD doesn’t want you to take it lightly.

A look at the PassMark Benchmarks list featuring Ryzen 5 5600X

Ryzen 5 5600X is a 6-core, 12 thread processor and at its heart lies the new Zen3 architecture. It has 32MB of L3 cache and operates at 3.7GHz and uses an AM4 Socket. On the PassMark CPU benchmarks list it manages to overpower Intel Core i9-10910 @ 3.60GHz. However, an even more impressive stat is that it manages figures as fast as AMD Ryzen 7 3700X and Intel Core i9-10850K @ 3.60GHz. The Ryzen 5 5600X might just be at a disadvantage given the lack of 2 cores. There are speculations that games and a few other applications may be optimized in the future for 8-core processors. Well, I guess that is AMD’s headache and they would probably manage one way or another. The APU supports DDR4 memory and utilizes a TDP of 65W. 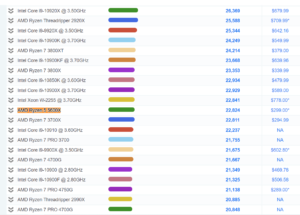