AMD, the US-based computer processor developer, has announced the all-new graphics-card – Radeon RX 5600 XT at the ongoing CES 2020 event. The RDNA architecture based graphic-card is manufactured on 7nm process, which AMD has pit against the rival NVIDIA 1660 Ti chip.

AMD chose not to go with high-end GPU this year; according to the OEM, the new Radeon RX 5600 XT, which is upgraded version of the Radeon 5500XT, will focus on delivering up to 120 FPS at Full HD resolution (1080p) gaming only.

The company also showcased the performance delivered by the new RX 5600 XT as compared to the rival’s 1660 Ti chipset. The benchmarks showcased the maximum FPS achieved by the new RX 5600 XT and NVIDIA 1660 Ti when running on maximum graphics settings. Six gaming titles were included in the showcase – Call of Duty: Modern Warfare, The Division 2, God of War 5, Apex Legends, Fortnite, and World of Warcraft: Battle of Azeroth.

According to AMD, the new Radeon RX 5600 XT outperformed NVIDIA 1660 Ti in each test by achieving the highest FPS on max settings. 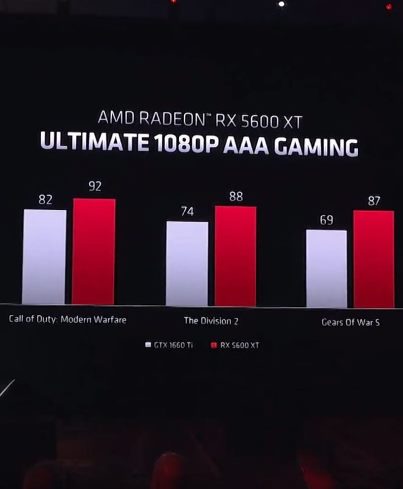 RX 5600 XT comes with a lot of exciting design features like Long Life Dual Fan Design and Metal Backplate. Not only this, RX 5600 XT also features 2304 cores clocked at around 1560 MHz for a total performance of about 7.2 TFLOPS, and it will be first in the AMD Navi family to feature 6GB card.

With these new under-the-hood improvements, the company has claimed to deliver 75% better performance the RX 5700XT with the same clock rates.

You can check out the more specifications and features of the new Radeon RX 5600 XT below.

The all-new AMD Radeon RX 5600 XT will be available with a price tag of $279 USD. And the sales start from January 21