AMD 5000 A4 desktop processors a.k.a Vermeer would also be unveiled on AMD's online event.

Have you ever witnessed the opening of floodgates? These situations arise mostly when water rises above a certain qualified danger mark. Once the gates are opened, the water splashes its way through with enormous force. You see, the tech and gadget space is somewhat like that situation. When information regarding any new arrival happens to be enticing enough, the floodgates to leaks and rumours open up. The months of July and August were highly devoted to NVIDIA’s Ampere GPU series. The Green Army had opened the floodgates to everything GeForce RTX 3000, if you may. The dust is settling down on that, but leakers have caught a new fish in AMD. Reports suggest AMD Ryzen 9 5900X might be launched around mid-October.

It was only yesterday when we talked of the first appearance of AMD Ryzen 7 5800X on AotS benchmark site. Those were the first glimpses of AMD Zen3 architecture’s potential on paper. A tweet from Ryzen ClockTuner’s creator Yuri Bubily has led to increased faith about AMD sticking to their plans. The lineup is initially set to feature four GPUs namely, Ryzen 5950X, 5900X, 5800X, 5600X. Yesterday, we confirmed that AMD Ryzen 5800X would be an 8-core part processor and 5950X a 16-core. The Big Navi has also been doing rounds since quite some time. If Yuri Bubily’s claims are anything to go by, Radeon RX 6000 GPU could also be out by mid-November. 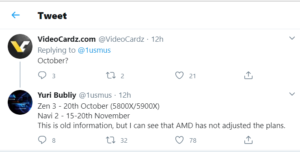 Not long ago, entry level information was released about the Navi family. The Big Navi or Navi 21 supposedly features 80 CUs. An online event is scheduled for the 8th of October and AMD are expected to pull more than just a few rabbits off their hats. Talking about rabbit, AMD Ryzen 7 5600X, a low-end processor is also expected to launch later.