A new ranking has been discovered following patch note 1.29. There appears to be an upcoming mode in Warzone with either a score-based ranking or eliminations aside from the classic BR. It was initially thought that a new map or a new area could have been added to Warzone, but the discovery of this Rebirth mode seems to show just the opposite now. To decontextualize things, the words “island of rebirth” were found in Russian scriptures on the Warzone Season 1 roadmap following its integration into Call of Duty Black Ops Cold War which will be released on December 10th. 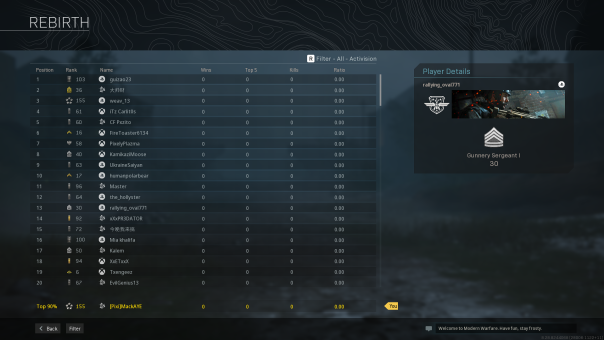 Except that the appearance of a table with a score as well as a top completely changes things. It could actually be a completely separate game mode, on a different map – indeed – perhaps with a smaller squad. One can think that Rebirth could join the playlist in the coming weeks, in order to add a very specific mode to Black Ops Cold War, just like Pillage or Mastodon Royale is for Modern Warfare.

As for Alcatraz, no news has been given, but nothing can prevent the map of this “new game mode” on Warzone from being the famous prison on an island. In the continuity of things, this could make sense, but the lack of official information pushes us to not affirm anything for the moment.

Just like every season, the game mode “classified” by Activision and Treyarch will, at the latest, be revealed on December 10 when Warzone integrates with Call of Duty Black Ops Cold War.