Finally, the day has come when Vivo has launched its new interface for Android-based phones, as you can see in the leaked image from Weibo, under the title Origin OS (which is said to be inspired by a sliding puzzle game- Huarong Road), and its beta mode has even become accessible for some of the smartphones. Vivo announced the new OS arrival at a conference in China in 2020. During the present time, even the IQOO vary can also be paving its way for a new journey towards the brand new UI- and six smartphones are ready to join the beta version of this new user-interface.

In comparison to their FuntouchOS, the new Origin OS which is Android 11 based is a major restoration. Over the next few months, the Vivo company is planning out to make the Android-11 based Origin OS inherent to many of their devices. Vivo’s new Origin OS comes with a pack of many visual changes and is also offering a lot of new features such as Live Wallpapers, Multi-Turbo 5.0, Klotski Grid, Nano alerts, Enhanced Memory Fusion Technology, and more. The list of compatible Vivo devices for this new Origin OS beta mode is iQOO 5, iQOO 5 Pro, iQOO 3, iQOO Neo3, iQOO Pro, and the first Vivo iQOO. Users that are based in China can sign up for the initial beta mode, and once the software is confirmed to give no bugs or errors, Vivo will apply it to all the devices. 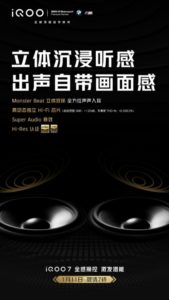 Moreover, as seen above in the leaked image by Weibo, it is recently confirmed by the Dongguan-based company that the new upcoming Vivo iQOO 7 will be bearing the stereo speakers, which is said to be developed by Monster – now this is the company that brought the Beats by Dre to life.

The new Smartphone Vivo iQOO 7 will come with a Hi-Hi chip that’s dedicated to raising the dynamic range over 120 dB and over 0.0003% of lower distortion. At present, there will also be support present for Hi-Res Audio which is available both over the wire and also wirelessly. And Vivo is adding a new custom that comes with extensive customization software under the name Super Audio.

This year is for the Vivo, as it’s just the starting and the company has already started launching the latest versions, and all these new things. Let’s hope for the best and all the uses of Vivo are expected to experience the best deals in the upcoming months.

Microsoft Teams: Approvals App not available in Tenant, here’s why ?

Microsoft Teams: Approvals App not available in Tenant, here's why ?