The Operator has been overpowered since the game has been played professionally and by high ranked people. There was no counterplay of a  good Jett and an operator. After the issues and concerns raised by the community, Riot has finally come up with the operator nerf in its latest patch alongside some more updates in the game which will improve the experience of the players. 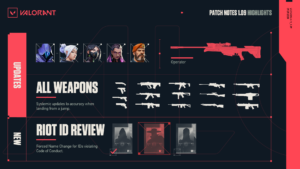 Following Changes have been made to respective Agents:-