Errors are something that is unavoidable in online shooters, especially on tactical 5v5 FPS Valorant that often run into issues frequently with the new updates and patches rolled out by Riot Games. The bugs in the updates often break a few functions of the live server that ejects players out of the match with an error code, and Error Code 57 is no exception either and is often reported by many players.

If you’re experiencing the error code 57 in Valorant and are frustrated, we’ve listed some of the workarounds that have helped a lot of players in fixing the bug and allowing them to play matches. Continue reading the article to know more about Error Code 57 and some fixes and workarounds for it. 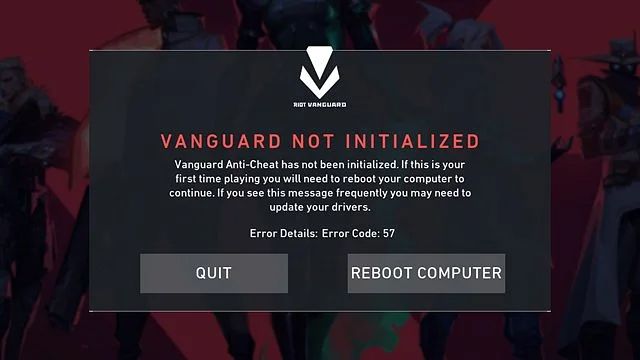 The root cause of Error Code 57 in valorant.

If you’re playing valorant and out of the blue you get an error code 57 message, it means that Vanguard, the game’s anti-cheat software failed to function correctly. PCs that have less than 16 or 8 GB of RAM often get this error, however, it can also show up unexpectedly after new patches are released by Riot games.

How to Fix the Error Code 57 in Valorant?

There are a few workarounds that were discovered by the players that solved the Error Code 57 and we have mentioned most of the effective ones that’ll fix it. With that being said, check out the fixes and workarounds for Error Code 57 in Valorant.

As the root cause of Error Code 57 is Vanguard’s unable to utilize more resources from RAM, closing unnecessary programs is the wise thing to do. This will not only allow the game to draw more resources from your PC, but it’ll also help it run flawlessly. Press the Ctrl+Shift+Esc key to launch the Task Manager and under the processes tab, close all the apps that are consuming more resources. After doing it, run the game again and see if the error code is still there or not.

If you’re facing error code 57, then it might be because Vanguard is detecting a third-party app that it seems malicious. If you don’t know which processes are causing the error, then restarting your PC and launching the game can fix the error code 57.

It may sound weird, but many have succeeded in fixing the error code 57 by flushing their DNS and we also recommend you to do the same. Follow the steps below to flush the DNS and fix the issue.

This will flush the DNS and all the network issues which might be why the game’s fetching you error code 57. Restart your PC and launch Valorant again.

If all of the abovementioned workarounds failed to solve the error, then the last thing that you can do is reinstall vanguard to fix the error code 57. There might be a few corrupted files in the anti-cheat software that are causing it. Once you’re done reinstalling Vanguard, reboot your PC and open Valorant.

We hope that you enjoyed reading this article, stay tuned for more updates about Valorant, guides, news, and more at Digistatement.

Valorant Error Code 19: How to fix it?

Valorant Error Code 19: How to fix it?