Will Xiaomi even update the Mi Mix 3 5G?

As the launch of Android 11 remains not so far, the level of excitement surges even further. Many OEMs are working on the latest iteration of their Custom OS as well. Well, there’s still some time until Android 11 starts hitting devices. While we have been hearing about the ongoing developments of the different custom OS by OEMs, Xiaomi has already rolled out the Beta version of its latest custom OS. That’s right! Chinese OEM Xiaomi will soon be rolling out the final MIUI 12 stable build as well. This latest version of MIUI brings home a lot of features on top of Android 10.

While many Xiaomi and Redmi devices currently run on the MIUI 12 Beta based on Android 10, many devices still remain in the Android 10 waitlist. The Mi Mix 3 5G is, unfortunately, one of these devices. Mi Mix 3 5G came out last year with Android Pie out of the box along with MIUI 10 on top. Many OEMs, including Xiaomi, delivers a total of at least two major updates to its devices. To be honest, the MI Mix 3 5G is a great flagship back from its time. 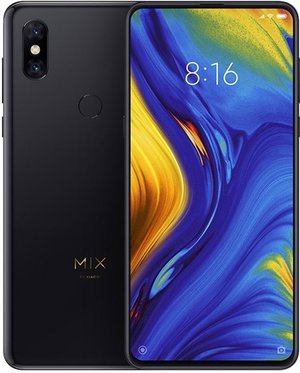 What really disappointing is the Mi Mix 3 5G is still not running on Android 10. Sadly, that’s true. Forget Android 10, the device doesn’t even run on MIUI 11 and rather runs on the pretty outdated MIUI 10. Is this what Xiaomi does with flagship phones that is barely a year old? Even almost many of the budget devices which are around two years old run on MIUI 11. Many devices like Redmi Note 5 Pro and Redmi 6 run on the latest MIUI 12 Beta based on Android 10. Then how come Xiaomi has not yet rolled out the update to the Mi Mix 3 5G?

When the Mi Mix 3 5G came out, there were barely any services for 5G. This became one of the prime reasons for the less number of units sold of this particular device. On contrary to this people preferred the Mi Mix 3 4G edition. All those people who brought the 5G variant have been suffering since then. They are really furious and disappointed. Xiaomi should have at least given the MIUI 11 update as of now. But, they didn’t.

It probably seems like Xiaomi has cut off all the software support of the device considering the less no of units sold worldwide. But, what about the people who bought it? Seriously, this is no legit reason to halt rolling out software updates to the Mi Mix 3 5G. There’s not even a slight fault of the users who bought it and sadly they are the ones suffering.

Users signing a petition for Android 10:

After a lot of waiting filled with anger and disappointment, users of the Mi Mix 3 5G are signing an online petition on Change.org. Will it be of any help though? There have been instances in the past where OEMs have listened to users and rolled out updates to many such devices. The Mi Mix 3 5G is a great flagship and only a year old. To be honest, the device should receive the MIUI 12 update and Android 11 as well given the fact that it came out with Android Pie out of the box. 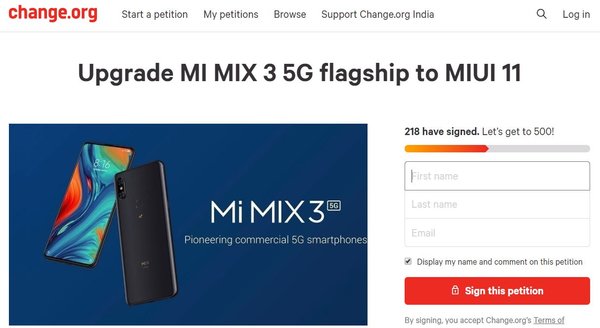 So, what will Xiaomi do with the device? Will it roll out the updates and make them disappointed users happy? Things can only be found out in the near future. Until then, let’s wait and see what all Xiaomi has to say about this and if it decides to deliver the update to the Mi Mix 3 5G. You can help out these people and yourself if you own a Mi Mix 3 5G by signing this petition. Here is the link to the petition.

Stay tuned for further updates on Mi Mix 3 5G Android 10 update and more such related content. Also, share this article with all those people who have been waiting for updates on their Mi Mix 3 5G.