The purpose of tower defence (TD) games is to protect a player’s territories or possessions by obstructing enemy attackers or preventing enemies from accessing exits. The game has recently received an update called the Simulator Frost Update. Along with all the new things added to this game, there are some more skins of the rocketeers. In this blog, we have a list of all the skins available for the Tower Defence Simulator Frost update. 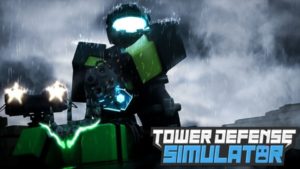 Paradoxum Games released Tower Defence Simulator on the 5th of June 2019 and it was officially released on the 15th of June 2019. It entails players forming alliances with one another to battle waves of various enemies before the map is either overwhelmed or won.

Under the new Frost Update, there are many new things added like maps, Towers, Emotes, Zombies, and Skincrates.

The Rocketeer has six skins that can be unlocked from Skincrates, they are mentioned below with their cosmetic changes and levels.

Level 5- Pumpkinhead, torso, sleeves, and pants are now black. The light inside the pumpkin is now red. Now rides a grey howitzer.

Level 0- Tan skin, red torso and pants, and black shoes. Wields a launcher with a mistletoe attached to it to attack enemies.

No cosmetic changes are available for this skin.