Sword Art Online is one of the most popular anime series. The anime takes place in the near future and focuses on Kirito and Asuna as they explore ups and downs of various virtual reality MMORPG worlds. Recently, first cour of  Sword Art Online: Alicization War Of Underworld has finished with 12 episodes. Now, the series is gearing up for release of second cour in April 2020 and revealed a new visual for it. 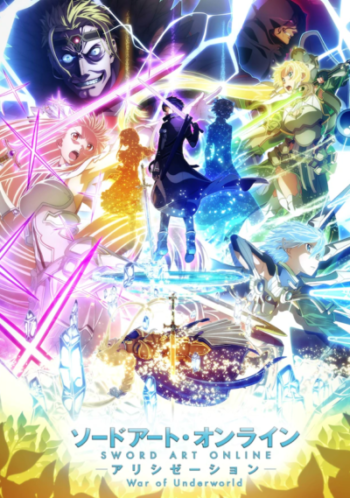 The visual has Kirito and Alice as central figure with Asuna and others on sides.

On April 11, it was decided that there will be an orchestra concert of the “Sword Art Online”. Now the team has revealed the details about the event.

Sword Art Online Film Orchestra Concert 2020 with Tokyo New City Orchestra will be held at the Tokyo Art Theater Concert Hall in Tokyo. The ticket sales are starting on January 29 and the two volumes of “War of Underworld” Blu-ray / DVD will also release on January 29.

In addition, an illustration of “SAO-X Chronicle-in KYOTO”  will be unveiled at the Kyoto International Conference Hall, Kyoto from January 31 to February 3. The final version features Kirito, Asuna, Reefa, Chinon, Yuuki, Eugeo, Alice dressed in original costumes. Ticket sales for the event will begin from January 8th.