Steam beats its record with more than 25 million simultaneous users!

The new year is off to a strong start for Steam, which has just broken its simultaneous user record once again! Valve kicks off 2021 with great news: Steam has once again broken its concurrent user record! With a staggering 25 million users, this is already the 7th time in just 12 months that this record has been broken.

The 2020 health crisis and the various lockdowns around the world may have helped this strong growth, but we must admit that Steam is expanding its library day by day and regularly offers enticing sales.

According to SteamDB, the number of concurrent users was 25,415,080 on January 2, 2021. Be careful, however, only 7.4 million of these users were actually active at the time of the record (the others were simply logged in), and the release of Cyberpunk 2077 certainly helped achieve it despite its setbacks. 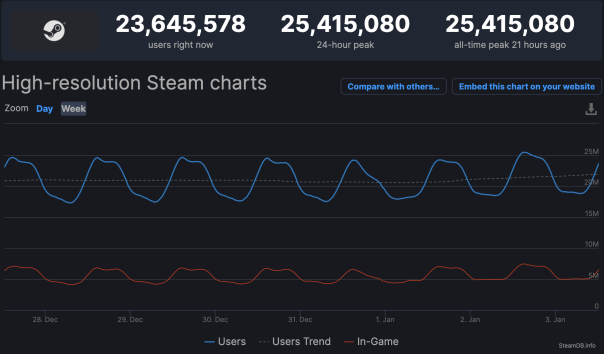