Sound plays a very important role when we start talking about multiplayer fighting games. Sound system becomes more significant when survival games like Escape from Tarkov comes into play. If you are given no sound in a multiplayer survival game, your chances of winning are almost next to impossible. Sound plays a major role in spotting an enemy or hiding from an enemy.

Escape from Tarkov is facing a criticism from the players for it’s sound system lately. The sound engine of Escape from Tarkov is facing many issues. The main issue in the sound engine can be explained with the help of an example: Suppose, you are in a building. You are surviving in a room with open gates and windows and an enemy approaches. Now, you are receiving same sound of enemy from being in the room and from being outside the room also. This has happened because the sound engine is not able to identify the difference between a normal wall and wall with windows and gates. The problem becomes bigger when player and  enemy are on different floors. The sound then become audible when the enemy is a few steps away from the player.

Steam Audio : How to turn on and activate ?

Steam audio relieves the frustrated players of Escape from Tarkov by giving providing high quality sound. It takes really long to understand full Steam Audio, so we will talk about the feature which will help us to experience greatness of sound in Escape from Tarkov. The feature we are talking about is ‘Binaural Audio’. It is basically related to 3-D sound. These types of sound are recorded with two microphones instead of one microphone to fulfill the requirement of 3-D sound. This feature goes hand-in-hand with HRTF (an algorithm which helps to track and spot enemies with the help of their sound) By activating the Binaural Audio, you will be able to hear 3-D sounds even with a normal headset. 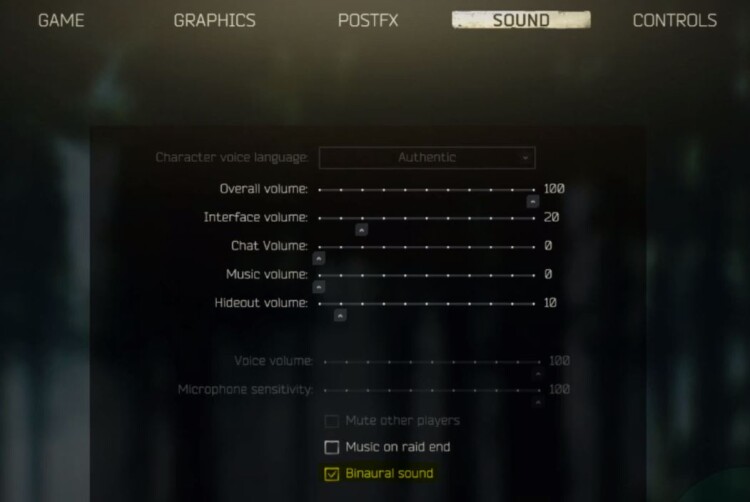 To activate this feature of Steam Audio in your Game settings, just go to the game settings. Then go to the sound option and check ‘Binaural Sounds’. After activating it, restart the game. 3-D sound will start working.