Xeno threat is the first Star Citizen event that invites all players to come together for a common cause. So as not to play like an amateur during the event and become a hero of Stanton, here are some guidelines on the process, and some tips.

What Is Xeno Threat Event?

Star Citizen’s Xeno threat event pits a terrorist group from Pyro against the players and the UEE Navy. The latter, taken by surprise by an attack of the Xenothreat, asks for a reinforcement of the citizens present in the system. So it’s up to you to get there at Jericho station and take the risks.

There you will discover a Javelin docked at the station, waiting for supplies to be able to regain the initiative and lead an offensive. Unfortunately, the Xenothreat are fine strategists and oversee the logistics lines of the UEE. Starfarer transport ships full of resources but not sufficiently escorted come under attack one after another . If the players manage to defend them, the supply will be quick. Otherwise, players will need to collect whatever they can from the wreckage and bring it back to Jericho.

As you can see, Xenothreat combines space combat, scanners, FPS combat, movement of sensitive cargoes and transport, in various environments such as a gas cloud, a space station and the interior of wrecks. 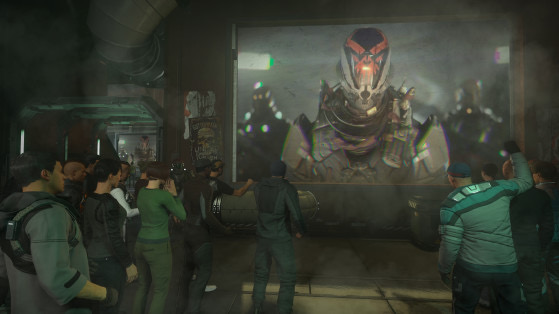 How to Participate and Rewards

When the event triggers, all players on the server receive a message from the UEE.
You must then go to the contract manager (Mobiglas contract manager), in the ” Priority” tab. The mission begins with CDF ALERT.
The rewards are shared among the participants and depend on the outcome of the mission. Success with few participants will pay off more than success with the whole united server. Each opponent downed, each cargo brought in earns CEUs. Whoever completes an action has a slight bonus.

At the Jericho Space Station, you’ll find the Javelin, as well as airstrips and trade counters.

The Javelin must be protected at all costs as the condition for defeating the event is the loss of the destroyer. When he takes hits, a life bar visible to all participants decreases at the top of the screen. Periodically, Xeno threat will send attack forces against the Javelin. Of Idris terrorist group will be part and it will help the turrets of the station and the forces of the YSU in the push.

The victory condition is the supply of the Javelin with sensitive cargoes (ACRYLIPLEX, DILUTHERMEX, ZETA PROLANIDE). This can be done either by successfully defending Starfarers, or by bringing those salvaged materials from the wreckage to Jericho Station. For that it is enough, after having loaded its vessel, to land on a runway (no air control, take a free one) and to go to the counter. Three counters at the top of the screen indicate resource requirements. The difficulty of transporting cargo lies in their different instabilities: not taking a hit, not making quantum travel, not dragging along. 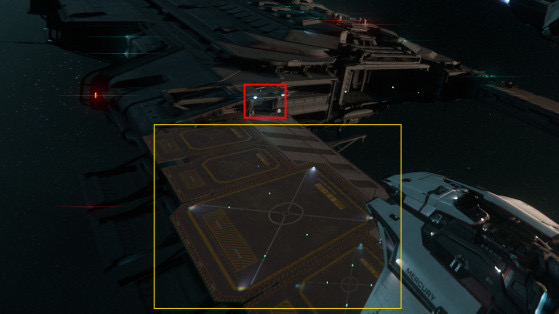 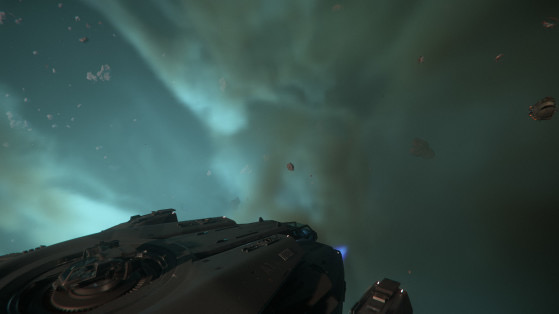 The gas cloud is located about 600 km from Jericho. This is where the Xenothreat ambush the Starfarers. You have to be quick to protect them as soon as an alert is given. Be careful with asteroids though. The gas cloud greatly hinders visibility and the frontal encounter with a block of rock is often fatal.
If a Starfarer is destroyed, it leaves a wreckage in which to salvage materials. The manual scanner (tab then hold left click while aiming the wreckage) allows you to know what materials are in it or if the place has already been emptied.

The Starfarer cargo bay door is closed on departure. You have to find an access and come and open the door from the inside before starting to transfer the boxes. In addition to being a labyrinth, the wreck is home to well-armed Xeno threat fighters who will have to be defeated, while avoiding fratricidal fire. Indeed, the players participating in the event do not have an identification above the head (you have to be in a group for that). For those with the easy trigger in dark places, it quickly turns into carnage.
In the Starfarer, sensitive cargoes are stored in blocks of four in racks in the cargo hold. Buttons are used to release the four boxes one by one.

Functions to be performed and equipment

Although there is no official role to choose from, players will have to perform different functions which can be broken down as follows.

The aces of space combat will have a lot to do, because they will have to intervene in two places:

Both events are announced by radio messages from the UEE. You have to be responsive to be in the right place at the right time. Within an organized group, it can be interesting to leave a force permanently in the space cloud because that is where there is the least margin.
In addition to these two UEE protection actions, space fighters may be called upon to defend carriers during their journey to Jericho.
Recommended equipment: a good battleship – hunter for light targets, Retaliator / Eclipse against Idris.

The dock will move the boxes to load the transport ships.
Recommended equipment: Multi Tool with essential tractor beam module.