Readers read at your own risk.

The previous chapter left us on the arrival of an exceptional ant. And everyone got bewildered. Okay, it was more like each one had their Spidey sense activated. More like how the heck was this ant so powerful. Hunter cha being a specialist in detecting power using her nose smelled something way too awful. This itself tells us how powerful that ant is. 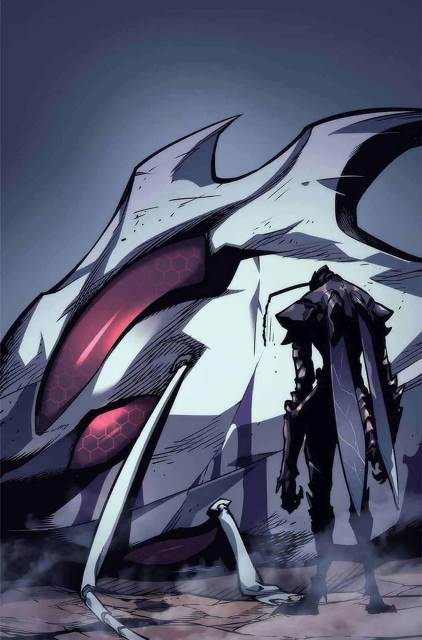 Then the ant is shown fully a humanoid creature fully black and looking just like the dark knight but a sinister dark knight. Okay wait to remember the ant king from hunter x hunter more like him but pitch black ant king. Yeah gauging at the power level this ant is the ant king. An utterly terrifying presence that no ordinary beast might possibly possess. Then he flew more like sprinted at a pace none was capable of detecting. When he saw the queen dead enraged he got berserk and attacked them all. Nearly tearing apart hunter Mah and knocking hunter Cha.

What else? nothing was able to hinder his path every attack turned out to be vague. To put it simply the king crushed them all. And then the worst possible situation happened the ant killed Min Byeong Gu with its claws tearing apart the Min’s abdomen. Obviously, he died as that shot was too sinister. Now, what will happen? Will they all die at the hands of this ant? Or someone will come to save their arse.

Speaking of saving Jin-Woo is not yet shown and where is our greatest hunter Goto San. Nowhere to be found still lurking around on the island somewhere. The next issue will tell us the fate of the hunters and the raid. Question is will Jin-Woo arrive? There is a high possibility of shadow exchange since long back he left shadow warriors on the hunters. What will happen then? The fight between the Jin-Woo and this ant will surely be intense. And the infamous ARISE scene will this be turned as the shadow soldier. Well, that’s too far fetched since we still don’t know whether Jin-Woo would come or not.

Till then stay tuned and enjoy winters. The next translated issue releases mostly on 2nd January.