Samsung, the Korean tech giant, is the renowned name in the smartphone world. The quality delivered by hardware and even software is one of the best in the market. Well, the OEM always surprises the tech enthusiasts all over the globe with its new innovation in new tech, but on the other side fails to roll out timely updates to its devices. For instance, Android 10 launched in Q4 of 2019, and OEMs like Oneplus has managed to bring the freshly launched Android 10 with new updates. But, Samsung is still rolling out Android 10 to its flagship range.

Well, Samsung once again managed to surprise us, by rolling out a new update to its mid-ranger device of 2016. A user of the Samsung forum has reported the arrival of a new update on Samsung J5 Prime.

Recalling the Samsung J5 Prime features. The device was launched back in 2016 with Samsung’s iconic home button. J5 Prime is the upgraded version of the J5 series which left the factory with a 5.00-inch display with HD resolution, Android 6.0 on the top and a 2400mAh battery capacity.

J5 Prime has launched three years ago, but Samsung managed to push another update to the device. The latest update comes with the title “Last Update Information,” and brings the latest security patch. Well, keeping in mind the record, it’s really interesting to see how that the OEM is still rolling out latest security updates.

Talking about the latest Samsung J5 Prime update. The new update weighs 325.53MB in size and brings the December security patch update to the device. Other than the security patch, the update also brings device stability improvements, bug fixes, and other features too. The company has mentioned “New & Enhanced features” too. But, there will be no new features.

We have mentioned the screenshot below, you can check out the details of the new update below. 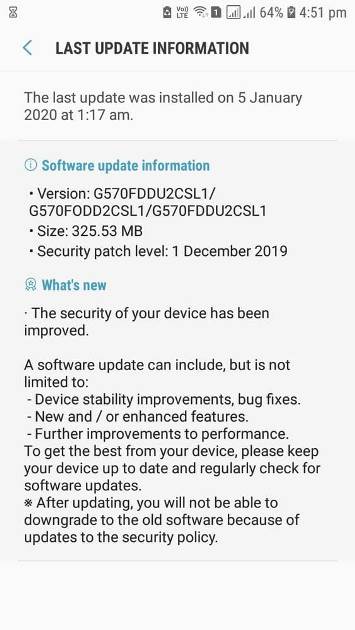 If you are a Samsung J5 Prime owner, you can update your device right now. Just go to system settings and check for the new update in the System Update section. Fret not, if you have not received any new update, as OTA updates roll out slowly in all regions.