Official details and changelog inside

Samsung is one of the most reputed and trusted tech brands across the globe. Though Samsung went through an extremely controversial phase related to battery issues, the future of Samsung looks very promising as the officials have announced the plans related to software and smartphones. And for the already released devices, Samsung has been rolling out security updates on time, be it an old device or a recently released one.

One of the Galaxy Note20 Ultra users shared an image on Reddit stating that Samsung has started rolling out the latest update with the October security patch. Here’s all you need to know!

The post was shared on an unofficial Samsung community page on Reddit. It was later confirmed in the comments section that several other users have received it too. As always, the update is rolling out in batches, so you might have to wait a bit to receive the patch. However, you can manually check on Settings > System Update if a new patch is available.

Here’s the image shared on Reddit regarding the update- 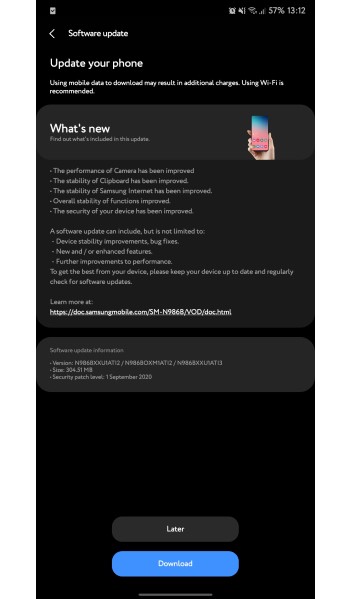 Samsung Galaxy Note20 Ultra is a flagship device from the brand that was released on August 21, 2020. This device is available in two variants- 256GB 8GB RAM and 512GB 8GB RAM. The base variant of this smartphone costs $1010. Galaxy Note20 sells out in Mystic Bronze, Mystic Black, Mystic and White colors.