Samsung released the Galaxy Fit in May 2020 as a worthy alternative to budget trackers from competing manufactures. It was a great budget alternative for those who didn’t want Samsung’s other high-end wearable offerings. In June it also launched the Galaxy Fit e which was an even further stripped-down version of the Fit.

The Galaxy Fit is small and lightweight, coming in at just 23 grams. It is made of polycarbonate with one physical button on the side and a heart rate sensor on the bottom. Other sensors included are an accelerometer, gyroscope and an optical heart rate sensor. The silicone straps it comes with are interchangeable.

For the display, it has a 0.95-inch AMOLED screen. Unlike other Samsung wearables, it doesn’t run Tizen, but Samsung’s lightweight realtime OS that focuses on the basics. The Fit has tracking for steps, heart rate, sleep, calories, running and cycling, but it does lack a GPS. It also can automatically trigger activity tracking. The small display and the basic operating system provide the Galaxy Fit with a stellar battery life of 7-9 days.

While users mostly liked the fit and functionality of the Galaxy Fit, they had a few complaints too. The lack of watch faces and slow animations were some of the biggest complaints out there. The low resolution of the display also bugged some users. The included sensors were also not as accurate as some would have liked.

Overall, it was a worthy product and we were excited to see what Samsung would do with its sequel. And it looks like Samsung is ready to release the Galaxy Fit 2. Prominent leaker @stufflistings shared on Twitter that the Samsung Galaxy Fit2 appeared on the Indonesia Telecom website. While there has been no official confirmation as of yet, we are hoping to learn more about it at Samsung’s Galaxy Unpacked event which is being hosted online today. 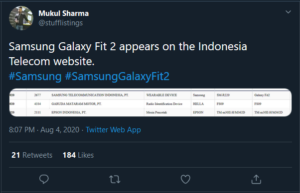