Samsung launched Galaxy A80 in the third sequel of its A-series smartphone back in April 2019. The device comes with unique front camera setup and powerful under-the-hood specs. Talking about the Android version, Galaxy A80 features Android Pie out-of-the-box. Well, it’s the first month of the year 2020, and A80 owners are wondering if they will be getting the new Android 10 and if yes, when will the update arrive.

To recall, Samsung Galaxy A80 packs some flagship features. The device comes with a dual-camera setup carrying 48MP + 8MP sensors, a powerful Qualcomm Snapdragon 730G processor coupled with 8GB of RAM and a 6.70-inch notch-less AMOLED display with a resolution of 1080 x 2400 pixels.

Coming back to the update-track. If you are a Galaxy A80, you will be happy to know that Samsung has already published its roadmap for the Android 10 released officially. The list includes the flagship Galaxy S-series, A-series and other mid-rangers too. The update for the various Galaxy devices will start rolling out from the first week of January 2020, which will bring Android 10 based One UI 2.0 to all the devices.

According to the official roadmap for Android 10 update. The Galaxy S-series and Note-series will be first to get the update, in the month of January. And talking specifically about the Galaxy A80 Android 10 release date, the update will start rolling out in March 2020.

Well, the Android 10 update will roll out along with the security patch update, so, you can expect the update in the first week of March.

Samsung Galaxy A80 is now getting the Android 10 update in some regions. If you haven’t received the update you can check for the update by going to  Settings>>Software Update>>tap on Download and Install option. The Android 10 (One UI 2.0) update For Galaxy A80 comes with the February 2020 security patch. 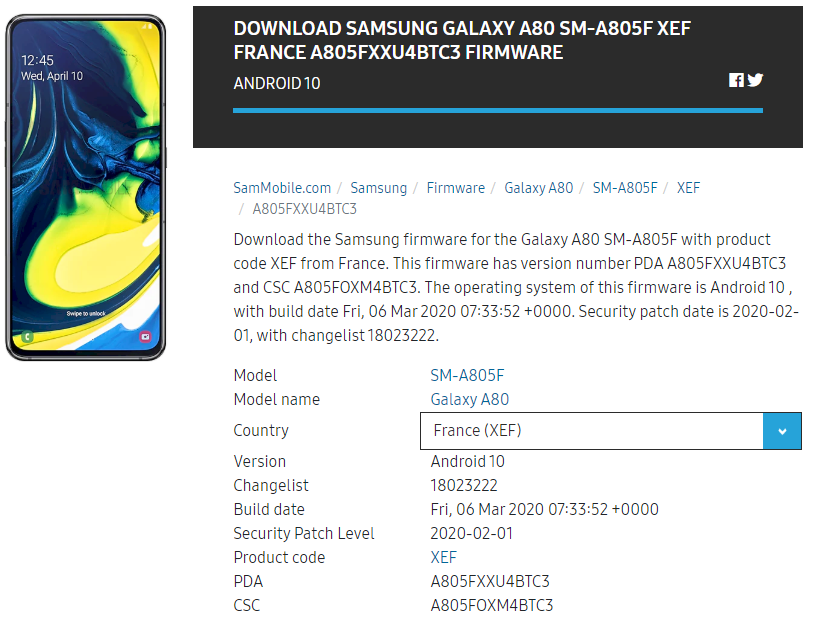 Note: Stay tuned! We will update the post with the latest news related to the Galaxy A80 Android 10 update