Google Camera is one of the most famous third-party camera application in the Android space. Originally, it was being developed for an image fusion technology for Google Glass. That was 2011 and we all know how the Google Glass turned out, so Google decided to use the technology for a camera app. Google Camera was released in April 2016 with support of devices running Android Kitkat 4.4 or higher. But after sometime, Google decided to limit the app to only Pixel manufactured devices. Since then users have always wanted the GCam app available for all devices because of it’s amazing image processing algorithms.

Well, developers have found a way to run the Google Camera app on other devices. These are known as Camera ports. We have to remind you that this is an unofficial version of the GCam app. These versions not only bring the GCam app to other devices, but also bring modern features to older Pixel devices. The ported versions workaround Google’s API to get this done. The unofficial version of the GCam app is now available for Redmi Note 8 Pro. 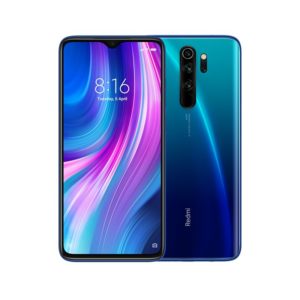 Talking about the Note 8 Pro, The phone has a big & bright 6.53 inch touchscreen display with a waterdrop-style notch on the top. The whole front is protected by Gorilla Glass 5. The Note 8 Pro is powered by Mediatek’s Helio G90T which is capable of running any game available on the Play Store as it was designed with gaming in mind. The users have the option to pair this beast of a SoC with 6/8 gigabytes of RAM. The phone has a battery capacity of 4500mAh with a 18W fast charging adapter bundled in the box. On the software front, when launched the phone ran MIUI 10 based on Android 9 Pie. The cameras on the back (triple camera setup) are said to be decent but their performance in low light scenarios is poor. Well, this problem has been solved now.

Google Camera’s ver. 7.3 has been released for the Redmi Note 8 Pro which also brings all the necessary requirements for running the 64MP raw module. The app brings all the features such as Portrait Mode, HDR+, Google Lens. etc. In addition, a specific button to change resolutions between 64MP and 16MP has also been added for the Note 8 Pro.

Here’s how to download the Google Camera app for your Note 8 Pro:-

How to remove/disable the Group Tabs/Grid Tabs Layout” setting in Google Chrome on Android in 2021 ?

How to remove/disable the Group Tabs/Grid Tabs Layout" setting in Google Chrome on Android in 2021 ?