The children are finally making their move. The raw scan page for chapter 167 of the manga ‘The Promised Neverland’ just dropped.

So in this post, we are going to talk about ‘The Promised Neverland’ Chapter 166 release date, raw scans, and spoilers. We will be looking at the spoilers now so if you do not like them you can scroll further down for more information on the release of the upcoming chapter.

In chapter 166 of ‘The Promised Neverland’. Emma’s team infiltrate Grace Field with proper planning, analyzing where they would have kept the hostages, it is ‘ Storage no.2 on B2’. They know the enemy count is too much to handle, Peter has Imperial army, Demon guards along with 100 human Sisters working in the House under Peter’s command. So they prepare everything 3 days before the attack.

They finally attack on the 13th of November. They distract demon guards using flash grenades and rescue hostages. Emma, Ray, and Norman finally encounter Grandma Isabelle, but they avoid her and focus on running out of there. Now, they are in hiding and planning to capture Grace Field as Peter has blocked all the exits.

In the raw scan page, we can see that the children came up with some plan and it looks like they defeated the demons using some kind of gas, sleeping gas perhaps. Oliver is leading a group and trying to get out of there. 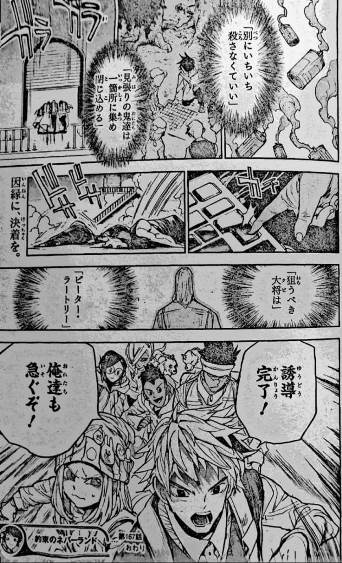 In the next chapter, Peter would have to come up with something otherwise he is going to lose this fight. The role of Grandma Isabelle is still unclear, we might see her in action. It’s possible that Oliver’s team is a distraction while Emma’s team can at least ensure the safety of the children before the fight.

We can expect a very good chapter after what happened in the previous one. The story is getting more and more interesting to read. Many mysteries, yet to unpack in upcoming chapters, keep reading.