Pokémon GO is one of the games in the gaming community, which has made a roaring launch. The game revolves around collecting different types of Pokémon, training them and fighting battles with others. Initially, the game had 150 species of Pokémon, but this number reached a benchmark of 600 by 2020. This game is playable on android and ios devices. It has recorded over $6 billion revenue in 2020.

For collecting the Pokémon, the player(trainer) has to move around in real life too which bridges a gap between real and virtual world. The Pokémon can appear anywhere around the globe. As player move around places, the mobile phone will vibrate when there is a Pokémon nearby. For collecting the Pokémon, one has to throw a poke ball to catch the Pokémon. The game has been released in different countries in different phases. Trainers can also battle with another trainers in this game in ‘GO Battle League’. 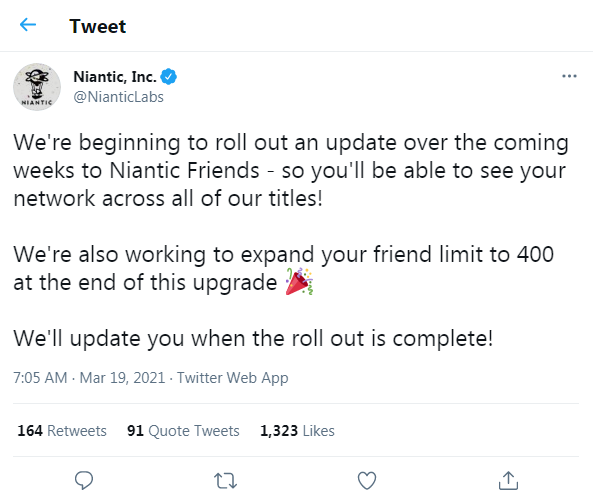 On 19 march, 2021, Niantic has announced that there will be an upgrade in the game after which the friend’s limit of the Pokémon Go Trainers will increase to 400. Currently, this number is 200. This is a very good news for Pokemon Go Trainers as they were waiting for this friend’s list capacity to increase from a long time. They have also complained many times about this thing on different social media platforms. The fans really thanked Niantic in reply of this tweet.

For those, who don’t know what Niantic is. Niantic kids is login platform specially designed to support it’s kids trainers in Pokémon Go. Niantic Kids helps parents to review and approve child permissions and provides them an option to control personal information before the kids can play. 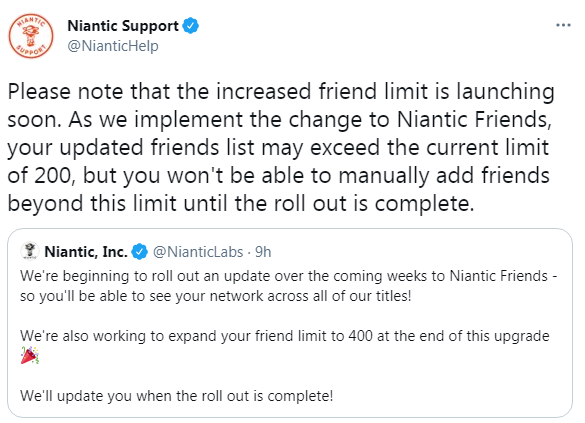 Following this tweet, Niantic Support confirmed after this period that the trainers may exceed the 200 limit but will not be able to manually add friends until the upgrade roll-out is complete.