A developer working on Call of Duty project for Activision leaked information on PS5 UI.

Gaming on computers started as a hobby. The part of the day you reserve for recreation, for entertainment. That was, long, long ago. It did not take much time for computer gaming to become a cult. If it weren’t for gaming dedicated machines, which we call ‘gaming consoles’, this cult wouldn’t have fostered the way it did. There are no doubts that Nintendo and Sega enjoyed early domination in the gaming industry. Enter Sony. and the tides turned. Play Station became synonymous to gaming, unlike anything ever before. The anticipation is building for the release of Play Station 5 since a few months now.

PS5 Specs and the leak

Fortunately or unfortunately, there seems to be a release from the developer’s side regarding the skin in the ninth generation Sony console. A dissatisfied developer working for Activision, evidently unhappy with the hierarchy, lashed out on Reddit and leaked the possible PS5 UI design. The developer told he was currently working on a Call of Duty project. The forum moderators were quick enough to identify the leak as ‘prohibited content’. Rightfully so then, it was removed, but in the age of online media, the damage is almost always done. The leak informs on the gaming panel being moved below, towards the bottom of the screen. There is some resemblance to PS2 too. Once you click on the game, you zoom into the image, a portal animation of sorts. 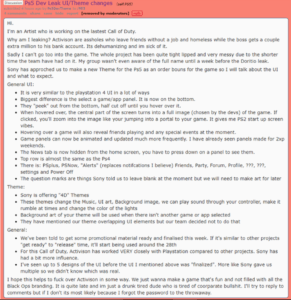 Sony had released information about the internal specification of the console, sometime back in June. Featuring an octa-core AMD Zen 2 CPU coupled with a customized Radeon GPU, the console has the ability to render in 4K and of ray-tracing. A 16 GB DDR6 memory will carry the burden of this all. The inclusion of a massive 825 GB SSD on PS5 will ensure that it is the smoothest console under the ‘PlayStation’ wing. Sony had also revealed that the new dual-sense controller will enhance in-hand gaming experience like never before. The leak also suggests some 4D themes will be offered too. As if there wasn’t enough buzz in the gaming space already about PlayStation 5’s arrival. This leak will prove to be a real fuel in the fire.