Both the Google Pixel 5 and Pixel 4A will not be coming to India.

As far as flagship announcements for the year go, it seems like the curtain is now ready to draw close. Apple’s iPhone 12 and iPhone 12 Pro were both unveiled in the online event a couple of days ago. Google also added to its Pixel series with the new Pixel 4A 5G and Pixel 5. Both sport the new trending punch hole camera on the front. Unfortunately, as the company had announced back in August, the pair will stay shy of Indian Market. However, to remove that complete sense of loss some might feel, Google has made arrangements. Newer versions to both Google Camera (GCam 8.0) and Google Recorder were announced. The updates have been made available for various Pixel devices.

Google Recorder 2.0 is worth downloading

Google’s indigenous Recorder app is not old by any means. It marked its first appearance with the Google Pixel 4 series. WIth time it has matured and version 2.0 has arrived. All the new tweaks on this one only make the Google Recorder 2.0 a more useful and handy application. To ease you from struggling with long transcripts, the Smart Scrolling feature would find keywords for you. These would then be placed on a scrollbar and ease your navigation through and through. There’s a facility for editing your audio clips also now. Simply select from the transcript any portion that you wish to omit and click on Remove. There’s added support to convert your audio files into video format. Since many social media platforms do not allow you to post audio files, this feature would come in handy. 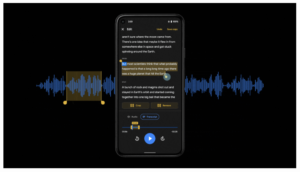 Google Recorder 2.0 comes to your aid when you want to make Text Corrections too. Even though it only works with individual words and not chunks of them, it really is a simple and useful feature. Select the word in the transcript click “Edit Word”, and there you go. Officially, only Pixel 5 and Pixel 4A get the new Google Recorder 2.0. But, courtesy XDA developers, APK can be sideloaded on older Pixel models too. Click Here to go to download zone.