The arrival of NVIDIA GeForce RTX 30XX gave many third-party manufacturers a chance to get creative. Most of them took the opportunity with open arms and produced graphics cards, as fancy as they come. The demand for MSI, ASUS, GIGABYTE and EVGA cards continue to increase. However, problems like bot attacks and scalping have left customers greatly unsatisfied with these big dogs. Online retailers have also been caught in the firing line for not providing cards at reasonable rates amidst rising scarcity. Lesser known graphics cards manufacturers can thus benefit from this situation and benefit they have. The likes of GAINWARD, Colurful and PALIT have had an opportunity as many potential buyers shifted towards these brands. PALIT has recently announced the extended member of its GeForce RTX 30XX family, the PALIT Jetstream RTX 3070.

This is the second offering from PALIT in the GeForce RTX 3070 category. The PALIT GeForce RTX 3070 Gaming Pro had been unveiled earlier. PALIT Jetstream should share many features with the Gaming Pro, however a specification reveal is still awaited. The PALIT Jetstream RTX 3070 is a compact graphics card with an unusually small PCB. On closer inspection one could claim that cable routing will prove inconvenient. Due to its compactness, the dual-8 pin power connectors have been positioned somewhere near the middle. The Jetstream series is painted regally black on the outside. The cutout of the rear backplate on this GPU is quite large, in fact more than most other Ampere GPUs. The official date for NVIDIA’s GeForce RTX 3070 card launch is 29th October. PALIT will also reveal the complete specification sheet of its Jetstream GPU on the 29th. 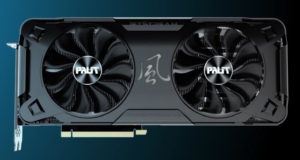