Customers who brought from Overclockers have grown pessimistic on the dates that their orders may arrive on.

Misinformation will be the death of this world. We live in a society where fake and baseless news spreads almost six times faster than what is legit. This stands true in the technology and gadget space too. We have recently seen how all sorts of untrue news surfaced with NVIDIA GeForce RTX 3000 series at the center of it all. The consequences of this kind of news sometimes result in customer anguish but more often cause inconvenience. Scalpers have risen to the scene, making the most of bots and interfering with online sales. EVGA among all have had a spell of misfortune. After becoming the first of many to fall victims to bots intervention in their sales, Overclockers UK have miscommunicated on an EVGA issue.

The web is such a good place with Reddit around. Concerned brands and manufacturers listen to queries on discussion forums and reply. Earlier in September, when the RTX 3080 custom builts went on sale, a good enough response had generated on Reddit. Overclockers UK were under scrutiny here too. Despite promos claiming that the RT X3080 cards would go on sale in September there weren’t any. 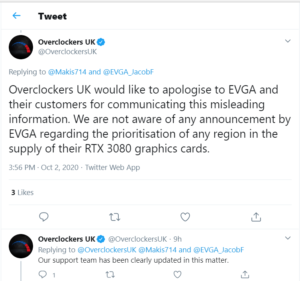 The ASUS TUF RTX 3080s were available with Overclockers UK but EVGA seemed to be absent. They have now apologized to EVGA on Twitter. They claimed some sort of prioritization of supplies concerning EVGA RTX 3080s. However, EVGA were quick to respond and state the information untrue. This naturally raised other doubts among those who had ordered the graphics card early on. Interested buyers also look forward to hearing from these manufacturers on queue jumping.