Oppo is a Chinese tech brand that was founded in 2001. The brand is popularly referred to as “camera phones” due to its tagline. Oppo is a sub-brand of BBK Electronics and has grown to be immensely successful. In 2019, Oppo was the top smartphone brand at its home market, China. Also, the Global ranking of the brand at that time was #5. This was the breakthrough that made Oppo a well-recognized and reputed brand with a fan-base and audience waiting for its devices. Fun fact is, BBK Electronics is a parent brand to other brands like Realme and OnePlus too.

Oppo Reno 4 has been on the headlines for a couple of hours. A very important detail, or image to be precise has been leaked and therefore, here we are with all you need to know about that!

Seems like the world can’t wait till the official announcement about the device is made. An image has been leaked on Weibo, a popular Chinese social networking platform that shows off the upcoming Oppo Reno 4. The leak shows two Oppo Reno 4 models in different color variants placed next to each other, next to a Reno 4 name board.

The image has been shared by several bloggers and tech geeks, the most popular one being Ice Universe. The very first look of the device teases the shining glass rear panel that gives a premium touch the device placed out there! The bezels of the device wrap all around the perimeter of the mobile in a different color from the rear panel, a touch of exclusive sight! At the bottom right of the rear panel is the logo of the brand which is the name itself- Oppo.

The most important detail revealed is the unique Quad-camera setup at the read end. There are three main cameras aligned vertically to the left. Adjacent to the top-most camera is an LED flash and adjacent to the bottom-most camera is another camera. The setup is made in such a way that the main three cameras could be primary, ultra-wide, and telephoto capturing cameras. The horizontally placed camera slightly smaller could be macro, depth, or even TUF sensor. The camera module seems to largely poke out like many other devices from the brand. 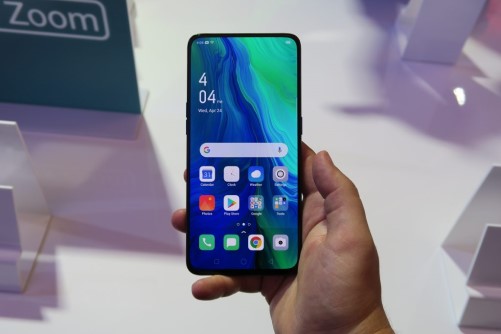 As the device image has been leaked, it will all be fine only when the brand makes an official move. Everything has been a bit chaotic since the leak of the image. Seems like some of the people are calling out the image as fake and even claiming that there is no such device in making or existence. Seems that number 4 is a bad omen in Chine and no brand from the origin of that place will use that number in a device series. Finally, users can expect an official reveal in the coming month.

As you can tell, there are no details available about the device apart from the leaked image. The device features and specs too are yet to be revealed or so-called leaked. But from its predecessors, it seems like Oppo Reno 4 will be flagship device too. If the leaked image is real, then the premium device will cost no less than Rs. 30,000. Also, this device might release in the second half of the year 2020.

Rest assured, we will update this article when we receive further information about Oppo Reno 4, so stay tuned! Also, share this article with all those who are waiting for this device!