It launched with ColorOS 6.0.1 based on Android 9, also called Android Pie.

Oppo’s update schedule can also be erratic sometimes. But Oppo A9(2020) received the ColosOS 7 update based on Android 10 this June. From today, several Oppo devices are going to receive the ColorOS 11 beta ROM that is based on Android 11. A user on Twitter who goes by the name Chatan(@Chatan_Kumar_) made a query about the ColorOS 11 update for Oppo A9 (2020). Oppo Care India replied to him on Twitter stating that the update will be rolled out in the second quarter of 2021. Second Quarter suggests the April-June 2021 timeline. 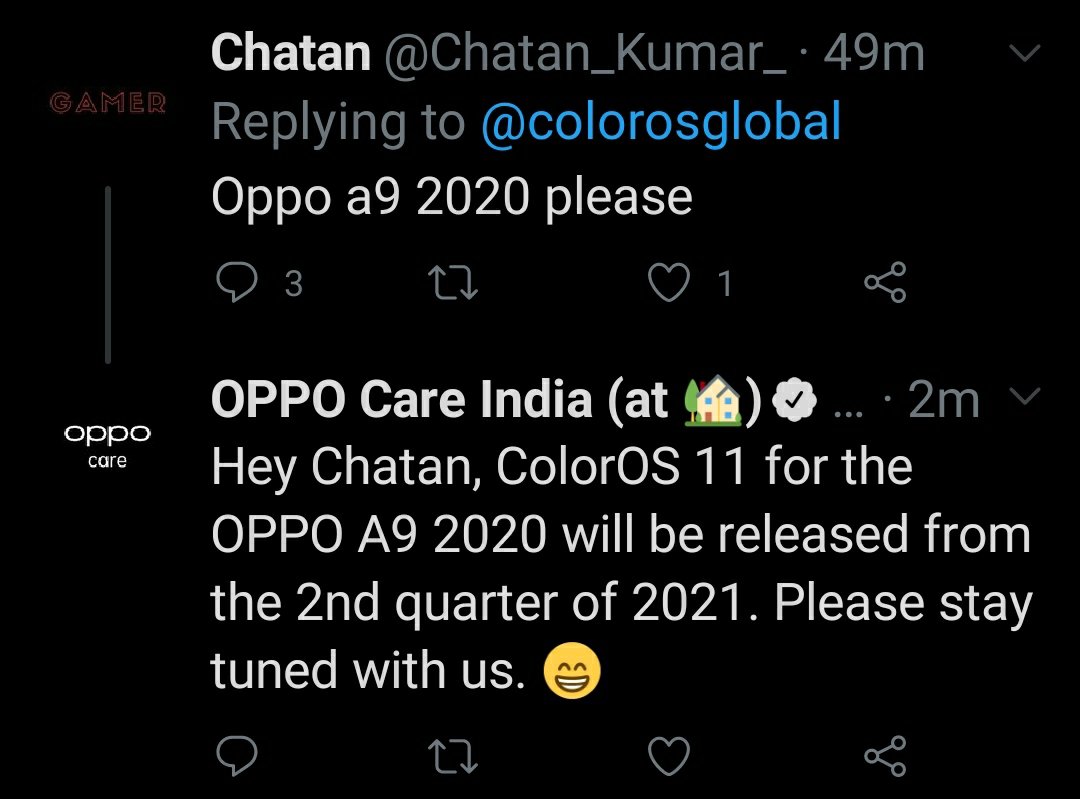 ColorOS 11 based on Android 11 brings a lot to the table. It gives a ton of customisations. Now Oppo has added a three-finger translation which uses Google Lens and Google Translate to translate foreign text in a screenshot. The new gaming mode can block incoming calls, mute notifications and prevent accidental on-screen gestures, for a better gaming experience. Dark Mode can now be customised from 3 profiles – Enhanced, Medium and Gentle. Enhanced provides pure blacks, while Gentle provides a greyish tone like the one prevalent in Google Play Store. Medium, as the word suggests, is the middle-man between ‘Enhanced’ and ‘Gentle’ Dark Modes. ColorOS 11 also retains the Android 11 feature to enable/disable the dark mode in sync with sunrise and sunset. You can also customise your ‘Always On’ Display with your designs. ColorOS 11 also brings in the ability to create mood-based wallpapers and ringtones. New fonts have also been added.

Also, since the ROM is based on Android 11, it encompasses the original features too – like the conversation focused ‘bubbles’ for chatting and texting, the new media player and the new Power Menu button. App permissions in Android 11 are also revoked if the app has not been used for a long time too, which is a necessary addition to the security and privacy of a device.

Hence, we can say that ColorOS 11 will be packed with features and fun for the Oppo users who will receive it.