One of the coolest features enabled by OLED displays is the AOD (Always on Display) functionality, allowing users to quickly glance at important information without touching their smartphones. But even though OnePlus phones have had AMOLED displays since 2016 starting with the OnePlus 3, they have been noticeably been missing this crucial feature. While OnePlus has justified not including this feature because of its impact on battery life, in recent years as battery sizes have grown, the clamour for AOD has only grown. OnePlus had confirmed by the arrival of this feature back in March by noting that the feature was on their internal roadmap.

Looks like OnePlus might be finally ready to implement this feature. OnePlus CEO dropped a teaser on Twitter with the image of a clock and the OnePlus symbol at the bottom. The caption simply says 11 “on display”. This is a clear hint that “Always on Display” feature will be finally arriving on OnePlus smartphones with OxygenOS 11 based on Android 11. The devices expected to be supported are the OnePlus 6 and above. However, the list of devices supported has not been confirmed yet. 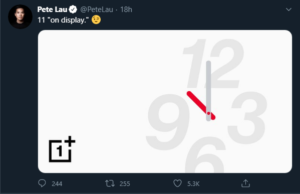 This is not the first time OnePlus has tried to implement the AOD feature. It initially launched the OnePlus 6 with AOD but it was quickly dropped just days after launch due to its significant impact on battery life. To compensate, OnePlus released the “Ambient Display” feature. This allowed users to take a quick look at essential information by either tapping the screen or picking the phone up. But this still required users to interact with their smartphones, therefore not everyone was satisfied.

We hope that OnePlus can successfully implement the feature this time, so their users can find out the time with a glance at their screens. If you too are keen on getting this feature, keep a close track of if and when your OnePlus device will be getting the Android 11 update.