by Vivek
in Manga

976th chapter of One Piece is out after a week hiatus, and no wonder it is an amazing one. In Chapter 975 we saw the Straw Hat alliance ready to face Kaido and Big Mom with 5,4000 samurai. Now, the latest chapter has completed the alliance force with the long-awaited return of the Boss Jinbie.

[Update] : Confirmed Spoilers in link below

One Piece Chapter 976 kicks off with Nine Scabbards mocking Kinemon for his mistakes. While they were having fun, Kanjiro kidnaps Momonusuke the same and draws a bird to flee from there. Kawamatsu tries to save him, but he fails to do it. Luffy, who was on Sunny, gets to knows about Momonusuke. Sanji tries to stop Kanjuro, but the later one fires ink arrow. Sanji saves Nami from arrows. Meanwhile, Momonusuke tells everyone not to fret about him and keep the focus on defeating Kaido. Luffy swears to save him later.

A few moments later, a remaining battleship of Beast Pirates begins a barrage of long-range cannon on our heroes. They were firing from very far, so Straw Hats begin to push toward them. But in a moment or two, Beast Pirates found a huge hole in their ship. After a minute, their ship sinks into the water and the attacker introduces himself as  Jimbei- The First Son Of The Sea who have returned to join Straw Hats as promised. His Bounty appears as 438 million belli. 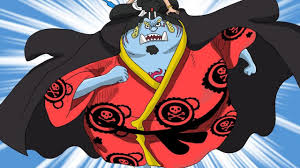 There is no break next week, so One Piece Chapter 977 will release on April 12, 2020. In the chapter, we will see a short conversation between Jimbe and everyone. Jimbe will also explain how he managed to flee from the Big Mom and survived to come to Wano. We may also see the commencement of War against Kaido and Big Mom. Kid will have no option but to join the alliance to get his revenge.

There is a possibility that chapter 978 may go on a one week break.