One Piece chapter 961 raw scans, spoilers pics and summary are out- Kin’emon becomes a retainer

With the chapter just around the corner, One Piece chapter 961 raw scans spoilers are out online. According to the leaked spoiler pics and summary, it looks like our predictions were right. In chapter 961 Oden is going to fight the myth mountain god wild boar. We already know that Bingo, Bongo and Bungo captured a snow-white boar who was baby of the mountain god. Now, the mountain god is rampaging in the flower capital. So, without any delay let’s look at the initial summary.

According to the One Piece 961 spoilers, the chapter is titled as  “Story of the mountain”.

The mountain god wild boar continues to attack the town as his baby boar was captured by Bingo, Bongo and Bungo which was later taken by Kin’emon. Everyone tries to find that white boar. One of the passers tells Kine’ mon that O-tsuru has been eaten by the mountain god. Kine’mon runs with swords toward the god mountain and said return O-Tsuru.

-the attack of the mountain god wild boar continued, and there was a lot of chaos. Everyone tried to find the white pig.

-one of the passers found kinemon and told him otsuro has been eaten by the mountain god. pic.twitter.com/eBavmcBMae

In meanwhile,  Oden stepped forward and tells the mountain god that the white boar is here. Kin’emon tries to explain to everyone that he is who brought that boar in the town. He lost his hope to live as he presumes that O-Tsuru has died but, Oden stopped him and uses a two-sword style to knock the mountain god.

The spoiler suggests that in chapter 961 we will get to know the reason why and how Kin’emon and Denjro became Oden’s retainers. 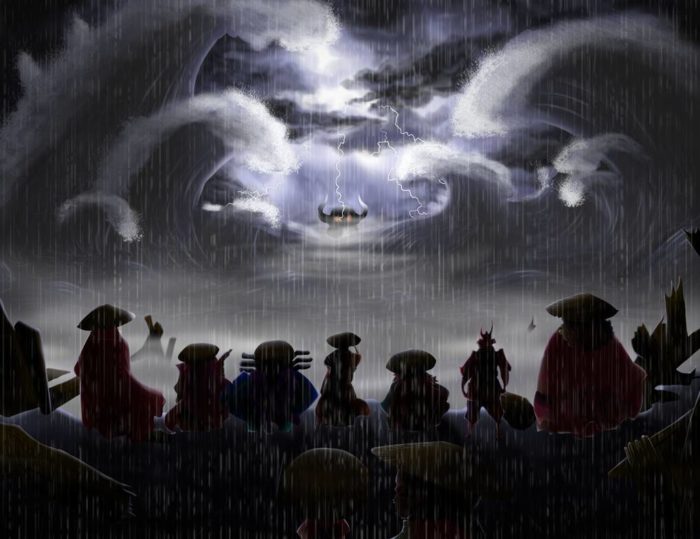 One piece chapter 962 is on break next week.