NVIDIA is ready to refresh its RTX range with the new flagship RTX 30 series.

by Akshay Tahiliani
in Gaming, News

The graphics card space has been a highly competitive one. The rivalry between AMD and NVIDIA is to thank for it. There are multiple offerings from both the class leaders over a wide range from budget-oriented to gaming and high-end performance specialised. After a long period of calm, NVIDIA has taken the onus to stir the graphics card market. Leak after leak, NVIDIA could sense the tide turning in its favour. The wait is over and NVIDIA will draw the curtains off its latest GeForce RTX 30 series on the September 1st, 2020. 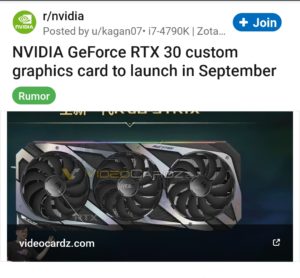 What does the RTX 30 series offer?

The GeForce RTX 30 is estimated to be of luxury pedigree. It will surpass the performance levels of the current RTX 20 series. The Ampere-based GPU series will initially have four models to it, the RTX 3070, RTX 3080, RTX 3080 Ti, and RTX 3090. Among these four, one is suspected to be a true powerhouse which based on the PG132 reference board will feature a mammoth 24 GB VRAM. All these were just rumours spreading like fire across Reddit. NVIDIA tweeted shortly afterwards, from their official GeForce handle and made the news official.

Something’s been cooking behind the scenes with AMD as well. The brand has teased the users of its new RDNA 2 architecture, and as per latest reports, the graphics card market will lighten up, when it arrives later this year. All we have to do is sit back and enjoy as the best comes out of this race between NVIDIA and AMD.