Founded on September 15, 2015 , NewPipe is an open source media application which is also well known as unofficial YouTube client and can be used as an alternative to YouTube. The App comes with amazing features like download audios and videos, sound cloud support, YouTube live streaming, Peertube support, Basic Android TV support and many more.

According to the latest post on the NewPipe official blog, new version of PipeLine v 0.20.3 has been released earlier today with some major improvements and optimizations. YouTube video load speed and two-finger swipe down gesture are the two major features of the new release. The official claims that the app loads YouTube videos much faster. It is because the YouTube has removed obfuscation from a number of URLs and here we can directly access them making the playback speed faster. 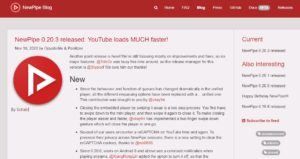 The release manager Stypox has shared all the important information regarding the new release in the official blog. Let us see few important ones.

We are going to share you the Apk file of the latest version down below.

To know more in detail about the new release, you can check the official blog posted by PipeLine. If you have not updated the app yet then we recommend to update it soon to enjoy the new features. You can also download it from the PipeLine’s official git repository by clicking Here.

How to Customize App Icons on iPhone on iOS 14