Newgrounds Player and the company’s official website features flash content dating back to over 20 years. The player lets the users view and play their audio, animations, games etc, which are based on Flash. Adobe, finally pulled the plug on the developmemt of Flash with its discontinuance on 31/12/2020. But realistically, Flash has been dead for years.

Adobe Flash Player’s use stopped due to a variety of reasons. Google, removed Flash from its Ads platform to due to security reasons. Users started to shift towards HTML5 which is far more reliable in the areas of safety and much faster to use. The final blow came in when Apple former CEO, Steve Jobs wrote an open letter that Flash will never be incorporated into their mobile operating system iOS. These reasons all together made Flash’s death inevitable.

As we know the Newgrounds Player depended on Flash plugins to play Flash content. Although some users are still being able to play videos, they have lost the ability to play games. Whereas, others are not able to play any content. Whenever they open the Newgrounds player, the Flash icon with an ‘i’ is displayed. This issue is happening mainly due to Flash being globally killed since the beginning of this year. 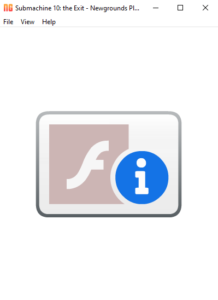 Right now, the workarounds to this issue are pretty limited. You could try re-installing the Newgrounds player or installing an older version of Flash without the killswitch, but the chances of this solution working are very thin.

There are two ways to fix this issue:-

1.Bypass Adobe Flash Player’s killswitch- This is a solution suggested on the company’s website by a Twitter user named @dclxvi-satan. This solution will work on Flash’s 32.0.0.445 version only.