by Jahan Patel
in Gaming

Even in Animal Crossing: New Horizon’s paradise island, the biggest problem is how to pay off the house loans take from Tom Nook. But the fishing and catching bugs can help you pay them off drastically sooner than expected, especially in April.

April has bought a lot of new things to the fray for players, from Zipper T’s Bunny day event to Cherry Blossom event. It also has revived the art of fishing and catching bugs- which means a great month for your pocket.

You see a Redditor has concocted up a sweet list of bugs and fishes you should catch in order get the best amount of money. 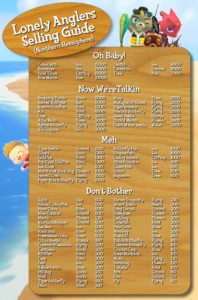 You see the list is divided into 4 tiers and are pretty self-explanatory but we will still give it a try. Don’t Bother comes to last which starts from 60 bells and goes up to 500 bells which are pretty horrendous. The list has Ants, Sea bass and squid as the rarest but if you really want to make this your one-stop-shop for earning bells, you should get serious.

Higher tier is MEH which starts from 600 bells and runs up to 1500. The list has Tiger worm as the rarest and Bagworm as the most common. If you are just starting with the catching, you can collect a number of Tiger worms to get 1500 for each. They are commonly associated with Ground.

But if you are serious let’s jump to Now We’re Talking tier. It starts from 2000 bells and follows up till 5000 bells for the snapping turtle. Now, this is where the serious money starts. Barred Knifejaws are particularly popular among the players, cashing at 5000 each and found in the sea. Wasps are easily found at shaking trees and you can cash in some number of them for 2500 bells each.

The big bucks though starts at the Oh Baby tier. For a tuna, at the Pier, you can get 7000 bells. Now the Coelacanth sits at the top of the list at 15000 bells but they are very rare so hunting them would just waste your time and resources.