In the series of popular Anime series games, we’ll be talking about Black Clover. Anime has a way of storytelling and is filled with a plethora of stories. This makes up for an epic selection of gaming experiences. Let’s take a look at what we know about the new Black Clover game: 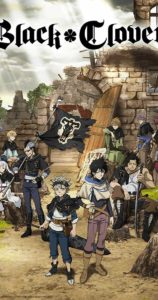 A relatively recent anime series, Black Clover has received critical and commercial success, selling over 11 million copies as of now. The story follows the journey of Asta, a young orphan with no magical prowess in a world where this is a rare phenomenon. He trains extensively to overcome these shortcomings, along with another kid in the orphanage, Yuno. Yuno is a strikingly opposite character where his magical prowess and Mana manipulation abilities make him a prodigy.

They soon develop a friendly rivalry, to prove themselves and compete for the title of the next Wizard King. Pretty soon, they join a Magic Squad each in order to move further towards their dreams. The series develops as they grow a reputation for themselves in Clover Kingdom.

Now that we have a better idea about the anime, it’s safe to say that the series is an amazing premise to base a game on. Keeping this in mind, 2 years after the series’ release a game was announced during the Jump Festa 2017, titled Black Clover: Quartet Knights, for Playstation 4 and PC. The game received critical acclaim, much due to its inclusive storyline. However, it received criticism due to its short game content or the lack of players for the online version.

Another game was released, this time on the mobile platform. The game was titled Phantom Knights and unfortunately had a short-lived life. Avid fans and gaming enthusiasts of the anime community have been waiting for another game to take its place. Reddit users were seen discussing the same near the end of 2020, anticipating a new game in the coming year.

As of now, we don’t have any concrete news about a new Black Clover game.
Previous Post

Friday Night Funkin’ Mod Maker/ Making: How to do it ?