Magic : The Gathering (MTG) Arena is a free to play, digital collectible card game which is also a popular eSports title. Developed and published by Wizards of the Coast studios, MTG Arena is a digital adaptation of the MTG card game. Players gain cards through in-game achievements, micro transactions and booster packs to build their deck and challenge other players with their unique arsenal of mythical cards. The game was released on Windows in Sept, 2019 and it is set to see a release on Mac-OS and mobile phones down the line this year.

Recently many MTG Arena players reported a strange phenomenon within the game. They were experiencing missing game asset files specifically for the black cards. Due to these missing assets, cards were not visible during matches while playing. The issue was highlighted and brought up on the MTG Arena official Twitter handle. Take a look at the tweet addressing the issue : 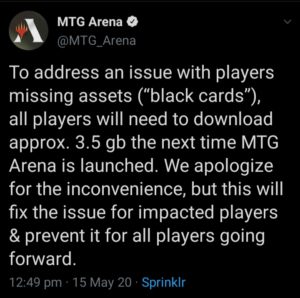 The missing asset issue was addressed by the Devs and as a solution they requested the player base to download a big, 3.5 gigabytes worth of hotfix which would bring back the missing game asset files. The download will be required before launching the game and it will fix the problem for the affected players and prevent it for all the other players unaffected and going forward.

As players are preparing for important upcoming tournaments this weekend such as the Redbull Untapped International qualifiers and the monthly MTG Arena Mythic Qualifiers events, immediate fixes are required for such issues. Having any unfortunate client crashes will lead to unavoidable game losses for affected players.

We hope this has cleared your concern regarding your game and the 3.5 GB hotfix.