Motorola is coming up with some new budget smartphones in this year of 2021 under its popular G series. The new smartphones, Moto G Power 2021 and Moto G Play 2021, are expected to arrive in the market this year. And now, just recently the renders and specifications got leaked out online. After looking into the specs and renders, it can easily be predicted that Moto G Power (2021) is obviously fancier than the Moto G Play (2021). And until now, there has been a lot of confusion in everybody’s mind about these upcoming budget phones, but thanks to the new leaks as we have a crystal clear image that what these two upcoming smartphones, Moto G Power (2021) and the Moto G Play (2021), are offering and what’s new in these latest additions to the G series. 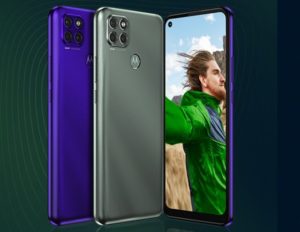 These leaked images of Moto G Power and Moto G Play 2021 were posted on voice.com by Tipster Nils Ahrensmeier. Now, this phone resembles a lot to Moto E7 Plus, the difference just resides in the specs and renders arena. Here, the phone visibly showcases its waterdrop-style notch, and also a more outstanding chin at the bottom display when compared to the Moto G Power (2021) including the dual cameras and a flash at the back with the square-shaped module. It is been said that Moto G Play will be offering the main camera with a 13-megapixel rather than a 48-megapixel sensor. It will also bear the 2-megapixel macro with a 5-megapixel shooter, which is quite downgrading but it is what it is.

In the renders, the phone can be seen in vibrant blue color. Well now, as far as specs are concerned, Nils claims that the latest Moto G Play is expected to have the Snapdragon 460 SoC powered in it, which is further coupled with 3GB of Ram and 32GB of storage too. Besides this, the leak claims that it will have a 6.5-inch display and a rear-mounted fingerprint sensor. Otherwise, no such changes are visible on the exterior, and Moto G Play is expected to feature a 3.5 mm jack and a 5000mAh battery.

Moto G Power (2021) features a hole-punch display design and a cut out on the top left corner which is maybe for a selfie camera. If we look at the photo carefully, there is a similarity of this phone to the Moto G9 as it also has a square-shaped camera that’s placed at the top center of the rear panel. The Moto G Power can also feature texture finding just like in the Moto G9 Power. It will be bearing the power of Snapdragon 662 and will come with 3GB RAM and 32GB storage, and there is also a discussion about a 4/64GB variant, which is a work-in-process too. According to the specifications, it is easily assumable that Moto G Power will be a bit more expensive than the Moto G Pay, even though they both are budget phones.

The buyers will get a 6.5-inch punch-hole screen which will be coupled with a large chin and slim bezels. It will feature a 4850mAh battery, now this is small for a Power-branded phone. In the rear, there can be seen a triple-camera setup. It consists of a 48-megapixel main shooter, a 2-megapixel macro camera, and also a 2-megapixel depth sensor. Pricing still remains to be out yet, until the launch in the coming months. It’s supposed to become available in Blue, Silver, and Gray colors.

Now if these phones are launched in India, there are expected to be priced under Rs. 12000.