MLB.tv was at first provided as a ‘Basic’ and ‘Premium’ tier. The basic tier offered only HD quality audio and video on desktop and laptop devices. Premium subscribers got access to live game audio and video on desktop and laptop along with mobile devices like Android and iOS devices by a free subscription to the At-Bat mobile app through connected devices like smart televisions, Blu-ray players, TiVO DVRs, PlayStation 3, Xbox 360 and PlayStation 4.

MLB.TV has since eliminated these restrictions and now users of both the “All Teams” and “Single Game” tier can share the same access including new access via an Amazon Fire TV, Google Chromecast and Roku devices. From the 2012 season, MLB.tv has started a service called Audio Overlay. It lets you to replace the video’s home or away radio feed or Park that removes the audio commentary and allows you to hear the ball park’s natural sounds. 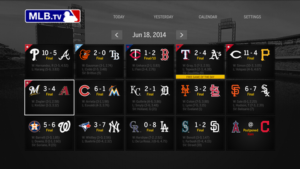 But recently users have reported an error related to the service. Roku users have reported this error. It is called the Error R300. Users said that they were not able to access MLB.tv because of this error. Users said that after they installed and launched MLB.tv and tried to log in to their account, the Error R300 appeared on screen. Even if they were somehow able to log in to their account, a few seconds later the error again appeared on screen.

A few people said that they experienced the error while watching any content on MLB.tv. Users said that the error appeared when they tried to play any content and also in between streaming of any content. A few users also said that they were not able to open MLB.tv at all because of this error. If you are experiencing the Error R300 on MLB.tv, you can follow these steps to fix the issue by yourself –

MLB.tv “media error: video not available” : How to fix it?

MLB.tv "media error: video not available" : How to fix it?