Windows 10 Insider Preview Build 20190 is released in the Dev Channel, with changes that wouldn't go unnoticed.

Comparisons between a smartphone OS updates to that of the PC OS updates isn’t something new. The various UI updates on top of that only add to the contrast. The point here is, with a smartphone you get to witness a continuous sense of newness. The same can’t be said, at least without hesitation about the PC platforms. Microsoft’s reputation for bringing reforms in the Personal Computers space can hardly be doubted, and they are adding to their reputation with this new Windows Insider update.

Microsoft released Windows 10 Insider Preview Build 20190 in the Dev channel. According to the senior programmer, Brandon LeBlanc, this version of Windows will have a feel-good vibe about it. Basically, it is an update where things would not go unnoticed, for once. This will be facilitated by the new Tips app, which after every major Windows 10 feature update, here onwards, will guide you through the notable changes. The big highlight here is not the Tips app though. Many of us own high-end systems and tend to work on a multiple GPU machine. This new update in the graphics setting will essentially come to their aid.

In the new Windows 10 Insider Preview Build 20190, you can assign the GPU of your choice for each and every application you run. Initially, that’s some work, but it’s just a one-time effort and the returns would be enjoyable, to say the least. For more convenience, you can even choose for yourself a certain high-performance GPU, as default. Windows will then automatically shift to this GPU of your choice when an app with higher demands is accessed. 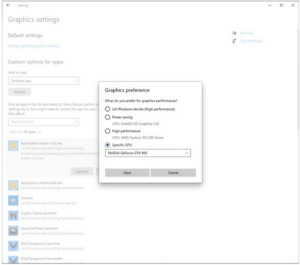 Besides these, lots of minor issues, the ones that usually go unnoticed, have been corrected. A certain issue with the touch devices, encountered while resuming from hibernation has also been taken care of. Microsoft acknowledged that there are minor troubles that have been reported or could result from the installation of the new Windows Build 20190 update. Notable ones include the inability to run Microsoft Store games protected with Easy Anti-Cheat, the long period of hanging also needs to be fixed that mainly results from installing new builds, among a few others. A step has been made to make PC OS updates more fruitful and experiential, if I may say so, and once tested in the Dev Channel, it would be a feel-good factor for the general users too. The brand also announced through its Twitter handle that Twitch will now be the new platform for Windows Insider Program Webcasts. 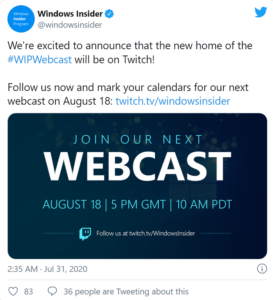