Mi A3 Android 11 update & release date status – When is it coming?

Android One OS is promoted as a lighter version of Android. This OS is known for its bloatware-free experience. The Android One is specially built for low-end phones. Google announced that devices running on Android One will get OS updates for two years and security patch update for three years. Google distributes Android One OS to different smartphone OEMs to give a close to the stock experience to users.

In September 2017, Xiaomi partnered with Google to launch Xiaomi’s first Android One smartphone, the Mi A1. Since then, the Mi A series has come a long way. The latest phone in the Mi A series is Mi A3. In this article, we will talk about whether the Mi A3 will receive Android 11 or not.

Mi A3 was released in 2019 with Android 9 out of the box. Android One devices are expected to get faster updates. But in the case of Mi A3, everything was so different. Even after releasing several Android 10 updates, the Mi A3 users were not satisfied due to the quality of updates. The users got too frustrated that they even demanded a refund from the company. But now, as the recent Android 10 update (V11.0.14.0.QFQMIXM) has started rolling out, users are satisfied. 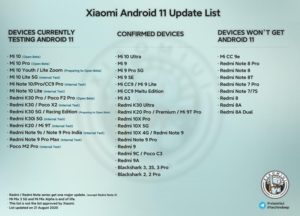 That said, we are continuously tracking reports related to Xiaomi Mi A3 & will update you with more information whenever it arrives, so stay tuned! Follow our website to get technology updates as soon as we publish them.